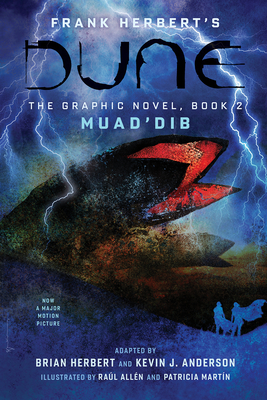 In DUNE: The Graphic Novel, Book 2: Muad’Dib, the second of three volumes adapting Frank Herbert’s Dune, young Paul Atreides and his mother, the lady Jessica, find themselves stranded in the deep desert of Arrakis. Betrayed by one of their own and destroyed by their greatest enemy, Paul and Jessica must find the mysterious Fremen, or perish.

This faithful adaptation of the 1965 novel, Dune, by Brian Herbert, son of Frank Herbert, and the New York Times bestselling author Kevin J. Anderson, continues to explore Paul’s journey as he evolves from boy to mysterious messiah. Illustrated by Raúl Allén and Patricia Martín, this spectacular blend of adventure and spirituality, environmentalism, and politics is a groundbreaking look into our universe and transformed by the graphic novel format into a powerful, fantastical tale for a new generation of readers.

Frank Herbert (1920–86) was an American science-fiction writer best known for his novel Dune and its subsequent five sequels. Brian Herbert, the son of Frank Herbert, has written a moving biography of his father, Dreamer of Dune. Brian is also known for his collaborations with author Kevin J. Anderson, with whom he has written multiple sequels and prequels to his father’s landmark 1965 science-fiction novel Dune. Kevin J. Anderson is the author of more than fifty bestsellers. He has written spin-off novels for Star Wars, StarCraft, and The X-Files and, with Brian Herbert, is the co-author of the Dune prequel series. Raúl Allén and Patricia Martín are artists living in Valladolíd, Spain. Allén and Martín have worked for Marvel Comics, Valiant, and DC Comics with writers such as Matt Fraction, Jeff Lemire, Matt Kindt, and Peter Milligan. Bill Sienkiewicz is an Eisner-winning, Emmy-nominated artist best known for revamping the style of comic and graphic novel illustration, most notably with Marvel Comics and DC Comics.

“This is a fantastic way to read the Dune epic and to become immersed in the greater details of the novel. The clear and precise artwork makes the narrative easy to follow and imbues the story with a cutting edge of the best stylish qualities that graphic novels have to offer."

"I liked the first volume of Abrams ComicArts' Dune adaptation, but I loved DUNE: The Graphic Novel, Book 2: Muad'Dib."

"Dune: Book 2 continues the story of Paul Atreides in this fast-paced and action-packed installment to the series that has captivated sci-fi fans for decades."