Les Parisiennes: How the Women of Paris Lived, Loved, and Died Under Nazi Occupation (CD-Audio) 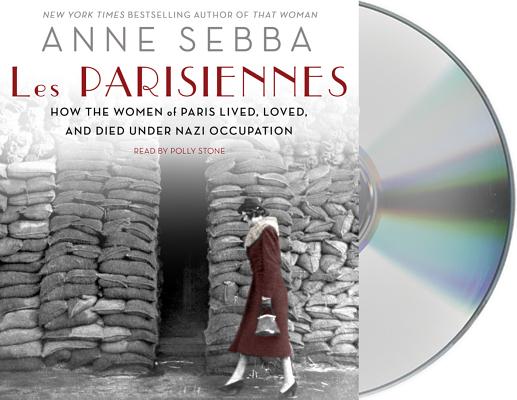 By Anne Sebba, Polly Stone (Read by)
$61.99
It's Complicated--Contact Us for More Information

Paris in the 1940s was a place of fear, power, aggression, courage, deprivation, and secrets. During the occupation, the swastika flew from the Eiffel Tower and danger lurked on every corner. While Parisian men were either fighting at the front or captured and forced to work in German factories, the women of Paris were left behind where they would come face to face with the German conquerors on a daily basis, as waitresses, shop assistants, or wives and mothers, increasingly desperate to find food to feed their families as hunger became part of everyday life.

When the Nazis and the puppet Vichy regime began rounding up Jews to ship east to concentration camps, the full horror of the war was brought home and the choice between collaboration and resistance became unavoidable. Sebba focuses on the role of women, many of whom faced life and death decisions every day. After the war ended, there would be a fierce settling of accounts between those who made peace with or, worse, helped the occupiers and those who fought the Nazis in any way they could.

This program includes an interview with the author and her editor.

The audiobook is read by Polly Stone, narrator of The Nightingale and Sarah's Key. In a starred Library Journal review of The Nightingale, Stone was applauded for her "impeccable narration that brings...wartime France to life with a distinctive and memorable set of voices that will keep listeners coming back for more."

Anne Sebba is a biographer, lecturer, and former Reuters foreign correspondent who has written books including That Woman: The Life of Wallis Simpson, Duchess of Windsor. She is a member of the Society of Authors Executive Committee. She lives in London.

Polly Stone has recorded a number of popular audiobooks, the most prominent of which is Sarah's Key by Tatiana de Rosnay. Publishers Weekly praised her narration of the novel saying that " Polly Stone gives an excellent performance... [The] novel is captivating, and the powerful narration gives it even greater impact." She has also narrated Shaggy Muses and is the author of 1003 Great Things About Being Jewish.

“Anne Sebba has the nearly miraculous gift of combining the vivid intimacy of the lives of women during The Occupation with the history of the time. This is a remarkable book.”
—Edmund de Waal, New York Times bestselling author of The Hare with the Amber Eyes

“As Anne Sebba makes clear in her fascinating book Les Parisiennes, there was no Hollywood clarity about life in the city of light….To read this book is to admire female bravery and resilience, but also to understand why the scars left by the Second World War still run so deep…. Sebba skilfully weaves the history of 1940’s Paris through the remarkable stories of women from all walks of life….Wonderful.”
—The Times of London, "Pick of the Week"

“Fascinating . . . Anna Sebba knows everything about Paris during the war and she relates in Les Parisiennes the end of all the whispered stories I’ve been hearing all my life. She understands everything about the chic, loathsome collaborators and the Holocaust victims, and their stories are told in an irresistible narrative flood.”
—Edmund White, bestselling author of Our Young Man

On That Woman
“A solid biography of the woman who became the King of England's excuse for abdicating his throne . . . depicts Wallis as a woman who sought power and privilege but never expected the damage she wrought or the wrath she engendered.” —The New York Times

“That Woman goes a long way in explaining how a not-quite-divorced, not-quite-beautiful American bedazzled a king out of his kingdom.” —Vogue

“Salacious and consuming, this well-researched biography will appeal to readers interested in British political and women's history.” —Kirkus Reviews

“Smart, eloquent, and unafraid to go beyond the myth of the duchess of Windsor.” —Publishers Weekly

“Brought to brilliant light in this responsible, respectful biography.” —Booklist on Jennie Churchill