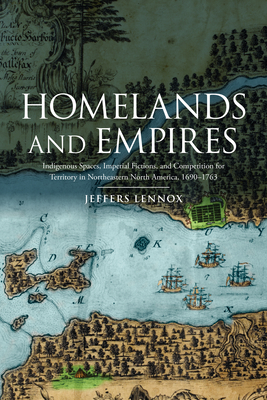 By Jeffers Lennox
$46.95
It's Complicated--Contact Us for More Information

The period from 1690 to 1763 was a time of intense territorial competition during which Indigenous peoples remained a dominant force. British Nova Scotia and French Acadia were imaginary places that administrators hoped to graft over the ancestral homelands of the Mi'kmaq, Wulstukwiuk, Passamaquoddy, and Abenaki peoples.

Homelands and Empires is the inaugural volume in the University of Toronto Press's Studies in Atlantic Canada History. In this deeply researched and engagingly argued work, Jeffers Lennox reconfigures our general understanding of how Indigenous peoples, imperial forces, and settlers competed for space in northeastern North America before the British conquest in 1763. Lennox's judicious investigation of official correspondence, treaties, newspapers and magazines, diaries, and maps reveals a locally developed system of accommodation that promoted peaceful interactions but enabled violent reprisals when agreements were broken. This outstanding contribution to scholarship on early North America questions the nature and practice of imperial expansion in the face of Indigenous territorial strength.