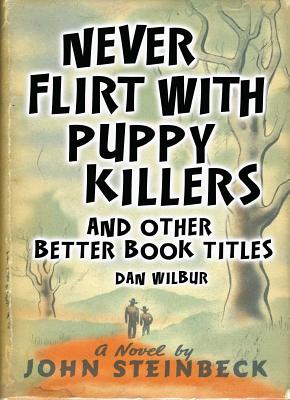 From his wildly popular Tumblr page, Dan Wilbur offers his delightfully cruel summary of the books you were forced to read in high school—with all that resentment and angst loaded into a punchy re-title. Incisive, vindictive, and brutally funny, each page features a recognizable cover with the title renamed: To Kill a Mockingbird becomes My Dad Is Cooler than Your Dad; A Walk to Remember is reborn as Teen Sex Is Ok if One of Them Has Cancer. Perfect for parties, gift for fanatic book lovers, and casual bathroom reading.

“Classics” (the books you’ve lied about reading). Actual Classics (Greek and Latin books people don’t even pretend to have read). Contemporary fiction (those books people talk about at parties that you’ve "definitely heard of” but never bothered to pick up). Children’s (books that say the most with the fewest number of words, i.e. “The Best Books”). Reference (Those books that were around before Google).

From children’s literature, The Very Hungry Caterpillar gets the retitle Eat Until You Feel Pretty. An American classic, The Great Gatsby is switched to Drink Responsibly. And from contemporary fiction, Gone Girl is retitled A Tale of Two Shitty People. There’s something here for every reader.

Dan Wilbur is a stand-up comedian, former Brooklyn bookseller, and the former Ecards Editor at Someecards.com. His writing has been featured on Collegehumor.com, McSweeney’s, the Onion News Network in IFC, Reader’s Digest, and Huffington Post. He was an “Adjunct Scholar” for the Comedy issue of Lapham’s Quarterly. He has also appeared in sketches for IFC, MTV, College Humor, and Funny or Die. Dan is the creator and editor of Better Book Titles, which has been featured on nearly every web site that covers literary subjects from BuzzFeed to The New Yorker.

"NewsFeed has a confession: This is probably our favorite Tumblr of the Week of all time." (Megan Gibson, Time)

"These hilariously honest titles for classic books will make you LOL."
(BuzzFeed)

"One of our favorite online locales is Better Book Titles..." (Chris Hardwick, @Midnight on Comedy Central)

"...this guy is super qualified to bash classics, and that's exactly what he's done in his latest book..." (Bill Ott, Booklist Back Page)