Just Wreck It All (Hardcover) 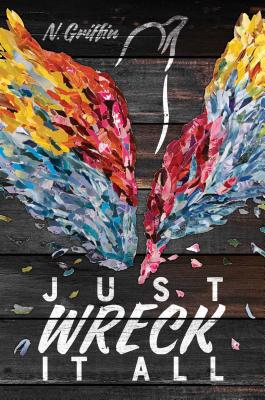 By N. Griffin
$18.99
It's Complicated--Contact Us for More Information

Crippled with guilt after causing a horrific accident two years earlier, sixteen-year-old Bett’s life is a series of pluses and minuses. But when the pluses become too much to outweigh the minuses, Bett is forced to confront her self-harming behavior in this stirring and powerful novel about self-forgiveness.

Two years ago Bett was athletic, fearless, and prone to daredevil behavior (fizzicle feats, she called them). But when a dare gone wrong leaves her best friend severely and permanently injured, everything changes. Now, Bett is extremely overweight, depressed, and forbids herself from enjoying anything in life, from her favorite sports to having friends—anything she determines to be a plus. But some pluses can’t be avoided, and when that happens, Bett punishes herself through binge eating. As long as she can keep the pluses and minuses balanced, she can make it through another day.

Then, on the first day of junior year, it’s immediately clear that Bett has to shift gears. The driver of the small motley crew on the bus with her is also the school’s track coach who is hell-bent on recruiting them all for his team. And running happens to be Bett’s favorite thing to do, which means it’s the last thing she’ll allow herself to do, or else she’ll have to minus each run out with a dozen Hostess cupcakes. Not only that, but there’s a vandal destroying all the art at the school, and Bett finds herself and her new teammates at the forefront of the rebellion against the vandal—despite the fact that this rebellion involves the very same fizzicle feats Bett swore she’d NEVER do again. Suddenly Bett’s life is full of pluses, too many to balance with even a grocery store’s worth of cupcakes. And she finds herself agonizing: Should she continue to punish herself for enjoying life when her best friend can’t in the same way? Or should she finally allow herself to live again?

"A much-needed story about a fat girl that does not equate weight loss with salvation."
— Kirkus

It is refreshing to see a story where there is no fat-shaming and no “weight loss = salvation” message . . . . Moving.
— School Library Connection

A heartfelt journey through the importance of self-love and forgiveness, perfect for fans of Sara Zarr and Gayle Forman.
— School Library Journal