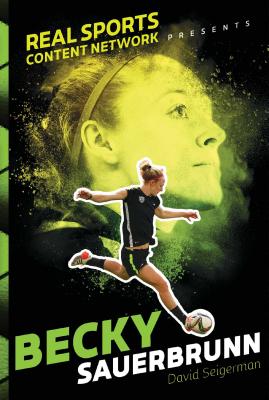 By David Seigerman
$7.99
It's Complicated--Contact Us for More Information

Before she was scoring goals, Becky Sauerbrunn was just a kid trying to fit in. Learn more in this first book in a middle grade nonfiction series about the childhoods of your favorite athletes!

Becky Sauerbrunn, a defender on the United States women’s national soccer team is known for her tough, no-quit attitude. In one game, she broke her nose and it never occurred to her to leave the field until she saw the horrified reaction from her teammates and coaches.

She learned how to be tough from a childhood of being the younger sister to two older brothers. To play with her big brothers, Becky would let them duct tape plywood to her forearms so she could play street hockey goalie and more!

But Becky’s brothers helped her in another important way—encouraging her lifelong passion for books and reading. In fact, she believes that reading has helped train her brain for the kind of problem-solving challenges she faces on the field, defending the most talented forwards in the world.

David Seigerman is a veteran sports journalist whose writing career began in newspapers (Newsday, The Jackson Sun) and moved on to magazines (College Sports Magazine). In 1996, he moved from print to broadcast media, becoming a field producer for CNN/SI and later the managing editor at College Sports Television. Since 2003, he has been a freelance writer and producer, and in late 2016, he cofounded HowFarWouldYouGo.org. He lives in Westchester County, New York, with his family.