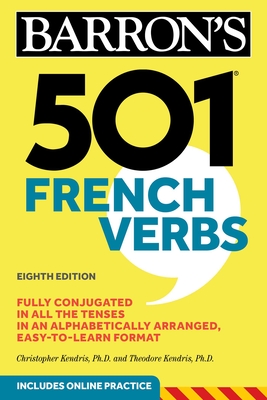 Choose Barron’s for language learning--a trusted resource for over 50 years!
This brand-new edition of 501 French Verbs provides language learners with fingertip access to a carefully curated selection of the 501 most common French verbs--in all tenses and moods! Each verb is listed alphabetically in chart form—one verb per page along with its English translation. Follow the clear, concise instruction, then take your language fluency to the next level with an all-new online activity center.

This comprehensive guide also includes:
• Lists of synonyms, antonyms, idioms, and usage examples for every verb
• A concise grammar review for easy reference
• The popular 55 Essential Verbs feature, with an in-depth look at usage and formation for the trickiest French verbs
•Over 2,800 additional verbs conjugated like the 501 models

Dr. Christopher Kendris earned his B.S. and M.S. degrees at Columbia University in New York and his M.A. and Ph.D. degrees at Northwestern University in Evanston, Illinois. He worked as an interpreter and translator of French for the U.S. State Department at the American Embassy in Paris. He taught French at the College of The University of Chicago, Colby College, Duke University, Rutgers—The State University of New Jersey, and the State University of New York at Albany. He was Chairman of the Department of Foreign Languages and Supervisor of 16 foreign language teachers on the secondary level at Farmingdale High School, Farmingdale, New York, where he was also a teacher of all levels of French and Spanish, and prepared students for the New York State French and Spanish Regents, SAT exams, and AP tests. Dr. Kendris was the author of 22 high school and college books, workbooks, and other language guides of French and Spanish.

Dr. Theodore Kendris earned his B.A. degree in Modern Languages at Union College, Schenectady, New York, where he received the Thomas J. Judson Memorial Book Prize for modern language study. He went on to earn his M.A. degree in French Language and Literature at Northwestern University, Evanston, Illinois, where he held a Teaching Assistantship. He earned his Ph.D. degree in French Literature at Université Laval in Quebec City, where he studied the Middle Ages and Renaissance. While at Université Laval, he taught French writing skills as a chargé de cours in the French as a Second Language program, and he was awarded a doctoral scholarship by the Fondation de l’Université Laval. Dr. Kendris has also taught in the Department of English and Foreign Languages at the University of St. Francis in Joliet, Illinois, as well as at the Hazleton Campus of Penn State University. He is currently an instructor in the Department of Languages and Cultures at Bloomsburg University, Bloomsburg, Pennsylvania.

About the Publisher
In the 1930s, Manuel H. Barron opened a bookstore in Brooklyn, New York.

People from the community asked Mr. Barron about books that might be available to help their children study for the New York State Regents exams. After realizing there wasn't anything available, Mr. Barron created his own study guides.

80 years later, Barron's has helped millions of people prepare for their next step.