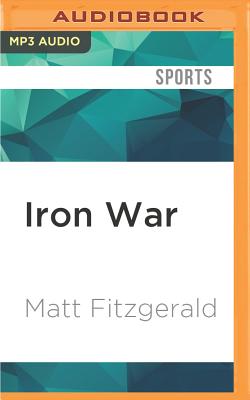 By Matt Fitzgerald, Seth Michael Donsky (Read by)
$9.99
It's Complicated--Contact Us for More Information

The 1989 Ironman World Championship was the greatest race ever in endurance sports. In a spectacular duel that became known as the Iron War, the world's two strongest athletes raced side by side at world-record pace for a grueling 139 miles.

Driven by one of the fiercest rivalries in triathlon, Dave Scott and Mark Allen raced shoulder to shoulder through Ironman's 2.4-mile swim, 112-mile bike race, and 26.2-mile marathon. After 8 punishing hours, both men would demolish the previous record--and cross the finish line a mere 58 seconds apart.

In his new book, Iron War, sports journalist Matt Fitzgerald writes a riveting epic about how Allen and Scott drove themselves and each other through the most awe-inspiring race in sports history. Iron War goes beyond the pulse-pounding race story to offer a fascinating exploration of the lives of the world's two toughest men and their unquenchable desire to succeed.

Weaving an examination of mental resolve into a gripping tale of athletic adventure, Iron War is a soaring narrative of two champions and the paths that led to their stunning final showdown.