Before She Disappeared: A Novel (A Frankie Elkin Novel #1) (Paperback) 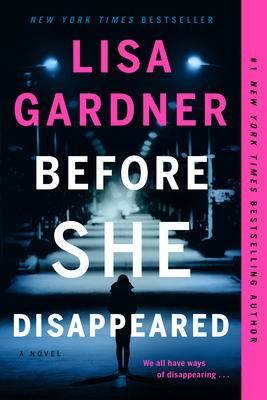 This is book number 1 in the A Frankie Elkin Novel series.

Lisa Gardner writes fantastic Boston-based mysteries. Her latest series features Frankie Elkins, a recovering alcoholic with a talent for finding missing people, who takes on cases whether the police want her help or not.

— From Before She Disappeared

From #1 New York Times bestselling author Lisa Gardner, a propulsive thriller featuring an ordinary woman who will stop at nothing to find the missing people that the rest of the world has forgotten

Frankie Elkin is an average middle-aged woman, a recovering alcoholic with more regrets than belongings. But she spends her life doing what no one else will--searching for missing people the world has stopped looking for. When the police have given up, when the public no longer remembers, when the media has never paid attention, Frankie starts looking.

A new case brings her to Mattapan, a Boston neighborhood with a rough reputation. She is searching for Angelique Badeau, a Haitian teenager who vanished from her high school months earlier. Resistance from the Boston PD and the victim's wary family tells Frankie she's on her own--and she soon learns she's asking questions someone doesn't want answered. But Frankie will stop at nothing to discover the truth, even if it means the next person to go missing could be her.

Lisa Gardner is the #1 New York Times bestselling author of twenty suspense novels, including The Neighbor, which won Thriller of the Year from the International Thriller Writers. An avid hiker, traveler, and cribbage player, she lives in the mountains of New Hampshire with her family.

“In this rare standalone, the prolific Gardner has come up with one of the most original characters in recent crime fiction, a woman readers can care about even while not being entirely sure of what to make of her.”--Washington Post

"This book, the best-selling author’s first stand-alone novel in 20-years, is a sharply-written, tension-filled yarn full of twists readers are unlikely to see coming. The most compelling element, however, is the character of Frankie, a recovering alcoholic whose obsession with the missing is a penance of sorts for the burden of guilt and grief she carries over a past trauma that took the life of a man she loves.”--Associated Press

"A masterpiece of post-modern noir....A riveting stunner of a tale where the rare appearance of the sun shines down on what is certain to be one of the best thrillers of 2021.”--Providence Journal

“Fans of this incredible author, police procedurals, timely immigrant stories, strong determined women, and tales that are not tied up with a pretty bow at the end will not be able to get enough of this intense page-turner.”--Library Journal (starred review)

“It’s hard to tag just one stand-out element here, between the multidimensional portrayal of Mattapan’s Haitian expat community, Frankie’s humanizing demons and straightforward investigative technique, and a page-turning plot with all its ends tucked in unpredictably tight. Tense and immersive, Gardner’s latest…is a sure bet both for readers drawn to gritty gumshoe fiction and for the growing legion of true- crime podcast fans.”--Booklist (starred review)

“Gardner is a pro at writing tough-as-nails, wiseass, broken-yet-steely female characters, and Frankie does not disappoint…Fans of Gardner’s Tessa Leoni, D.D. Warren, and Flora Dane will embrace her new heroine's grit and empathy.”--Kirkus Reviews

"The pace of Before She Disappeared makes it a faster read than the number of pages would suggest. For me, it fell into 'couldn’t put it down' territory, and of all Gardner’s books that I’ve read, I think this was the best.”--St. Louis Post-Dispatch

“Before She Disappeared introduces what may be the most powerful sleuth of the decade, an “ordinary” woman driven to uncover the truth at any personal cost. There’s only one thing to ask for by the time the book ends: please, please, a sequel and a series.”--New York Journal of Books

“As Frankie’s investigation progresses, it offers an up-close look into some of the issues that plague American society today—racism, antipathy toward immigrants and the trafficking of young women—while providing a blistering narrative and sympathetic characters…Before She Disappeared is billed as a standalone, but I’m thinking it would be the perfect setup for a terrific series.”--Bookpage

"A propulsive mystery, one with enough twists and turns to keep even the most seasoned readers of the genre guessing until the end. But it’s also --- perhaps more importantly --- a fascinating character study, as Frankie wrestles with her own demons even as she grows closer to her goal.”--Bookreporter.com

“Smart, suspenseful, and socially conscious, this novel knows how to concoct a thriller out of current affairs without cheapening the subject or deriding any of the people involved. Frankie is a troubled, complicated woman determined to do the right thing while also recognizing that she doesn’t have all the answers and is in no place to dictate the affairs of others. She’s a wonderful heroine for our turbulent times."--Criminal Element

"Think Jack Reacher with a specific mission and a driving purpose…Socially conscious and deeply researched…this thriller will keep devoted thriller and suspense readers on their toes. Plus, Gardner knows how to write honest, believable female leads.”--BookTrib

“Before She Disappeared is a first-class crime novel by a master of the thriller genre. I highly recommend it.” – David Baldacci

“To read Lisa Gardner is to put yourself in the hands of a master storyteller. In Before She Disappeared, she gives us a crackling mystery, gritty atmosphere and an unforgettable heroine. I loved the damaged, determined Frankie Elkin. You will, too.”— Riley Sager, bestselling author of Home Before Dark

“Before She Disappeared has a gutsy heroine, a timely, fascinating storyline, and a real sense of anticipation that kept me turning the pages.” – Tami Hoag

“This time Gardner truly hits it out of the park. Frankie Elkins is a heroine for the ages.” – Tess Gerritsen

“Nuanced and complex, Before She Disappeared proves once more Lisa Gardner knows how to set a hook better than anyone. It’s a ‘just one more chapter’ thriller that will have you reading into the night. I loved it.”--Gregg Olsen, bestselling author of Water's Edge

"The case is intriguing and travels in refreshingly unexpected directions. . . . You're highly likely to enjoy this." —The Booklist Queen

"Fascinating . . . A page-turner about the search for a missing teenage girl in Boston and the mysterious woman obsessed with finding her." —The Big Thrill

"Hang on to some of the best moments in story telling by the master herself Lisa Gardner. Before She Disappeared may just be one of her best . . . and that is saying a lot." —Fresh Fiction