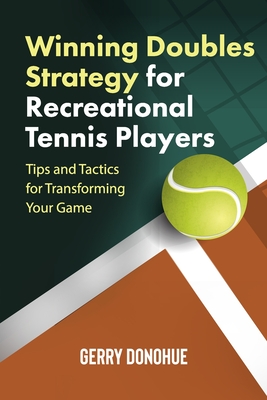 You want to amp up your doubles game. Maybe you want to win your Saturday morning match more than once a month, or you're slipping down the pecking order on your league team.What do you do?If you're like most recreational players, you double down on improving your strokes. You sign up for lessons, serve buckets of balls, and drill your backhand. While all of these steps are good and will help your game, you won't see the results you're looking for as quickly as you would like.Doubles is much more than the sum of your strokes. While you want to have some combination of a steady serve, consistent return, decent volley, reliable lob, dependable overhead, and good groundstrokes, you also have the twin challenges of playing with a partner and facing two opponents on the other side of the net.The better-and faster-way to start winning more is to improve your match strategy. Rather than focusing on to hit the ball, concentrate on the where, when, and why you're hitting it.Strategy is so important in doubles because you are playing as a team. All of us have been in those situations where your partner and you are each individually better than either of your opponents, but they beat you every time because they play together. They move as one, cutting off your angles. They always seem to be at the net, keeping you on the defensive. And they appear to know where you are going to hit the ball, waiting there to put it away.You can be one of those players.While there are numerous doubles strategies, the most effective for recreational players is to avoid unforced errors. In recreational doubles, eight out of every ten points are decided by unforced errors. Entire games can roll by without any of the players hitting a winner. The primary cause of unforced errors is trying to do too much with the ball. You hit your first serve too hard and it plows straight into the net. You drive your return down the line and it lands wide. You smash your overhead and it hits the back fence on the fly.When you play strategically, you don't have to try that hard. On every point, depending on where the four players are on the court, there are a limited number of correct shots to hit-often only one-and a correct position to take following your shot.Here's an example. You're receiving serve in the ad court. The server has spun the serve wide to your backhand, pulling you outside the doubles sideline. You may have the urge to drive the ball down the line, but that would be a high-risk shot even if there weren't an opponent standing at the net. You might try a sharply angled cross-court sliced return, but from that depth, you will be hard pressed to keep the ball in the court. And, if you do, the server will likely be well-positioned to hit a volley into the court that you've vacated.The right shot-really the only one-is to lift a lob over the net player's head. You remove her from the equation and force her-and maybe the server-to retreat from the net. With one shot, you steal the serving team's advantage and give your team the opportunity to take the offensive.On the following pages, you will learn how to adapt the concepts of strategic tennis to every situation you face on the doubles court. We will also look at the importance of playing with the right partner, the need for constant and constructive communication between partners, and how developing a shared strategy can give your team an almost unassailable advantage in most recreational doubles matches.Improving your tennis strokes significantly can take months or even years. Improving your tennis strategy enough to start winning the matches you're now losing takes only a few weeks. Knowing where to hit the ball and where to move will have a bigger impact on your game than adding a few miles per hour to your serve or working on your drop volley.