Civil War by Other Means: America’s Long and Unfinished Fight for Democracy (Hardcover) 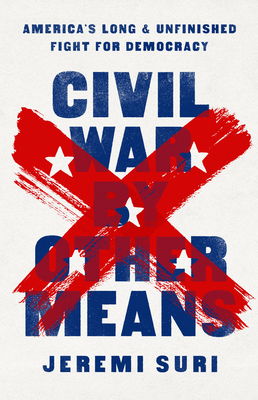 The Civil War may have ended on the battlefield, but the fight for equality never did

In 1865, the Confederacy was comprehensively defeated, its economy shattered, its leaders in exile or in jail. Yet in the years that followed, Lincoln’s vision of a genuinely united country never took root. Apart from a few brief months, when the presence of the Union army in the South proved liberating for newly freed Black Americans, the military victory was squandered. Old white supremacist efforts returned, more ferocious than before.

In Civil War by Other Means, Jeremi Suri shows how resistance to a more equal Union began immediately. From the first postwar riots to the return of Confederate exiles, to the impeachment of Andrew Johnson, to the highly contested and consequential election of 1876, Suri explores the conflicts and questions Americans wrestled with as competing visions of democracy, race, and freedom came to a vicious breaking point.

What emerges is a vivid and at times unsettling portrait of a country striving to rebuild itself, but unable to compromise on or adhere to the most basic democratic tenets. What should have been a moment of national renewal was ultimately wasted, with reverberations still felt today. The recent shocks to American democracy are rooted in this forgotten, urgent history.

Jeremi Suri holds the Mack Brown Distinguished Chair for Leadership in Global Affairs at the University of Texas at Austin. He is a professor in the university’s Department of History and the LBJ School of Public Affairs. Dr. Suri is the author and editor of eleven books on contemporary politics and foreign policy, most recently The Impossible Presidency: The Rise and Fall of America’s Highest Office. His other books include Henry Kissinger and the American Century, Liberty’s Surest Guardian: American Nation-Building from the Founders to Obama, and Power and Protest: Global Revolution and the Rise of Détente. He writes widely for many publications and is also the host of the podcast This Is Democracy.  He tweets at @JeremiSuri.

“A riveting, page-turning, and epic tour de force that is as timely as it is insightful. Jeremi Suri brilliantly contextualizes the roots of contemporary racial and political divisions that culminated in the January 6, 2021, assault on the US Capitol by taking us back to the crucial two decades after the Civil War’s formal end. This passionate, wide ranging, and engaging history is a must-read for all those interested in the future of American democracy.”—Peniel E. Joseph, author of The Third Reconstruction

“No previous scholar has written about the post–Civil War decades with more brio, passion, and outrage than Suri. Civil War by Other Means scathingly documents the grotesque persistence of violent white supremacism in the not-quite-conquered South—as well as the growing indifference in the victorious North to the plight of newly freed Black citizens. A blisteringly good read, and a sobering lesson on the toxic stubbornness of American racism.”—David M. Kennedy, professor of history emeritus, Stanford University

“This book should be required reading for every member of Congress and high-school history class. It does a marvelous job of connecting the post–Civil War with what we are experiencing now.”—Jim Falk, president emeritus, World Affairs Council, Dallas/Fort Worth

“Brimming with insight and outrage, this is an illuminating look at the roots of today’s political polarization.”—Publishers Weekly

“Compellingly insightful and essential for all concerned about the United States’ present and future.”—Library Journal

“A sharp history in which the author argues that the Civil War has been raging for more than a century and a half—and the Confederacy is winning…A provocative look at a long shadow cast over the nation’s past and present.” —Kirkus

“Suri analyzes the post-Civil War period in America—and how it failed to help the U.S. create a truly equitable society.”—Austin American-Statesman

“Suri argues that we have had a national confrontation, often vicious, for more than 150 years about whether America will become a true multiracial democracy…Suri offers a persuasive dose of pessimism in assessing the United States today.”—New York Times Book Review