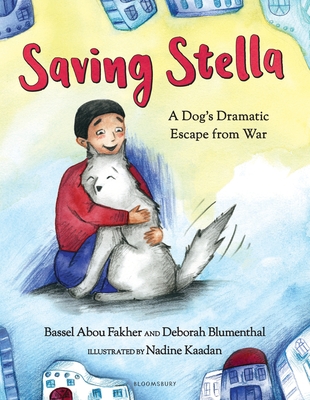 For fans of Two Bobbies comes a moving, true story about a young man and his dog who escape the violence of the Syrian War.

Some bonds are stronger than war . . .

Life for musician Bassel and his dog Stella in Damascus, Syria, has changed since the civil war began. Instead of enjoying long walks through their neighborhood, they hear bombs toppling buildings and sharp blasts of gunfire through the night. When it becomes too dangerous for him to stay, Bassel makes the difficult decision to escape, leaving his family, friends--and Stella--behind.

After a long, dangerous journey, Bassel finally finds refuge in Belgium, but misses his family, his home, and most of all . . . Stella. With the help of friends in his new home, Bassel hatches a dramatic plan to rescue his beloved dog.

This remarkable, true story will inspire readers and remind them that even amid the harshest circumstances of war, acts of kindness and humanity will always endure.

Bassel Abou Fakher is a musician from Damascus, Syria. Having learned to play cello as a young child, he went on to study music in his home city. He released two albums, one in Syria and one in Brussels, with his own Qotob chamber music group. After living through the Syrian civil war for five years, Bassel moved to Brussels, Belgium, at the age of eighteen where he currently lives and plays his music.

Deborah Blumenthal is an award-winning journalist and the author of twenty-three books for adults and children. Her thirteen picture books include: The Chocolate-Covered-Cookie Tantrum; Polka Dot Parade: A Book About Bill Cunningham; and Parrots, Pugs, and Pixie Dust: A Book About Fashion Designer Judith Leiber. She has been a regular contributor to the New York Times, and her feature stories have appeared widely in many other newspapers and national magazines. Deborah lives in New York City with her husband, journalist Ralph Blumenthal, and their rescued dog, Nellie, a beagle/pointer mix.
www.deborahblumenthal.com

Nadine Kaadan is an award-winning author-illustrator from Syria. She writes stories inspired by Syria's rich cultural heritage and is committed to helping child refugees in Europe and the Middle East. She currently lives in the United Kingdom.
www.nadinekaadan.com
@NadineKaadan

“A good introduction to weightier topics such as refugees or the Syrian civil war.” —School Library Journal

"This true, gritty story. . . teaches children about the Syrian war and the plight of refugees." - Booklist Online