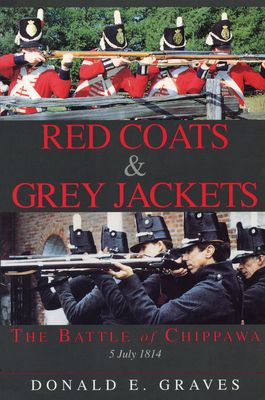 By Donald E. Graves
Not Available
Available to Order from Supplier: Arrives at Store in a Week(ish)
Because of how it is sold to us we cannot accept a return of this title.

... the definitive analysis of the battle of Chippawa. Donald Graves establishes its historical background, describes the opposing armies, brings them into battle, and assesses the results, without wasting a word -- yet his account of the battle combines high colour and exact detail. You find yourself alternately in the generals' boots and the privates' brogans, in all the smoke, shock and uproar of a short-range, stand-up fire fight.

A military historian with the Department of National Defence, Canada, Donald E. Graves has published many articles and monographs on warfare in the Mapoleonic period, including Sir William Congreve and the Rocket's Red Glare (1989). Red Coats and Grey Jackets is Graves's sixth book. he is the author of The Battle of Lundy's Lane, 1814 (1993) and co-author of Normandy 1944: The Canadian Summer (1994). His current project is to compile a comprehensive anthology of eyewitness accounts of the War of 1812. Donald Graves resides near Almonte, Ontario. when he is not researching or writing, he likes to engage in his two favourite hobbies - emuwatching and viticulture.

"Highly recommended for anyone interested in the British Army's hard fought 1812-15 battles in North America."