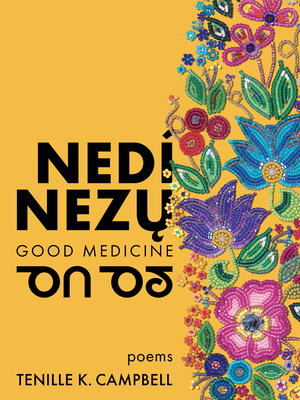 ned nezų (Good Medicine) explores the beautiful space that being a sensual Indigenous woman creates--not only as a partner, a fantasy, a heartbreak waiting to happen but also as an auntie, a role model, a voice that connects to others walking the same path. From the online hookup world of DMs, double taps, and secret texts to earth-shakingly erotic encounters under the northern stars to the ever-complicated relationship Indigenous women have with mainstream society, this poetry collection doesn't shy away from depicting the gorgeous diversity in decolonized desire. Instead, Campbell creates the most intimate of spaces, where the tea is hot and a seat is waiting, surrounded by the tantalizing laughter of aunties telling stories.

These wise, jubilant poems chronicle many failed attempts at romance, with the wry humour needed to not take these heartbreaks personally, and the growth that comes from sitting in the silence of living a solo life in a world that insists everyone should be partnered up. With a knowing smile, this book side-eyes the political existence and celebrates the lived experience of an Indigenous woman falling in love and lust with those around her--but, most importantly, with herself.

ned nezų is a smart, sensual, and scandalous collection dripping in Indigenous culture yet irresistible to anyone in thrall to the magnificent disaster that is dating, sex, and relationships.