Faith on Trial: Religion and the Law in the United States (Paperback) 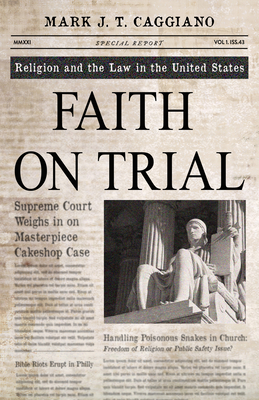 In Faith on Trial, Mark Caggiano invites religious progressives and liberals to re-enter the national conversation about religion and the law, complete with historical context and legal analysis.

Books about religion and the law are generally aimed at two audiences: lawyers and religious conservatives. These tendencies are a result of expectations on the subject as being either highly technical or arising from a conservative impulse to protect religious and cultural traditions.

In Faith on Trial: Religion and the Law in the United States, legal scholar and Unitarian Universalist minister Mark J. T. Caggiano, argues that concerns about separation of church and state often serve to silence religious viewpoints of people on the Left, many of whom exit the conversation in the hope of protecting important social issues from religious infighting. But it is impossible to win a debate that you never join, and as Caggiano writes, it is paramount in these times that “religious liberals and progressives cultivate and refine an ability to articulate the need for moral changes within the political system. That goal will require an understanding of the law as well as a moral vision for the world.”

Geared toward religious progressives and liberals—and complete with historical context, legal analysis, and examples of specific legal cases and statues—Faith on Trial is an invitation to the religious Left to re-enter the societal debate about morals and ethics, with social progress and inclusion at the center of a national conversation about religion and the law.

Mark J. T. Caggiano currently serves as minister at First Church in Chestnut Hill, Massachusetts. A former lawyer, he is a graduate of Harvard College and Harvard Divinity School and received his Juris Doctor from Boston College Law School. He is also an adjunct faculty member at Boston College Law School, teaching First Amendment law concerning matters of religious rights and the separation of church and state.