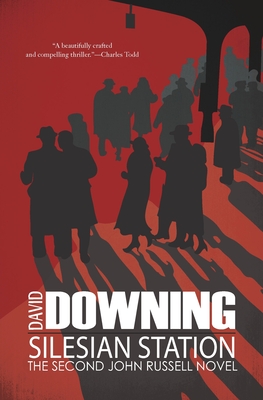 This is book number 2 in the A John Russell WWII Spy Thriller series.

“On the eve of WWII, journalist John Russell struggles to protect both his lover and his son while drawn reluctantly into murky international espionage. Downing artfully transforms the monumental conflict to human terms as he captures the atmosphere of Germany and the world on the brink.”
— Joe Strebel, Anderson's Bookshop, Naperville, IL

Summer, 1939. British journalist John Russell has just been granted American citizenship in exchange for agreeing to work for American intelligence when his girlfriend Effi is arrested by the Gestapo. Russell hoped his new nationality would let him safely stay in Berlin with Effi and his son, but now he’s being blackmailed. To free Effi, he must agree to work for the Nazis. They know he has Soviet connections and want him to pass them false intelligence. Russell consents, but secretly offers his services to the Soviets instead—not for anything too dangerous, though, and only if they’ll sneak him and Effi out of Germany if necessary.

It’s a good plan, but soon things become complicated. A Jewish girl has vanished, and Russell feels compelled to search for her. A woman from his past, a communist, reappears, insisting he help her reconnect with the Soviets, who turn out to demand more than Russell hoped. Meanwhile, Europe lurches toward war, and he must follow the latest stories—to places where American espionage assignments await him.

David Downing grew up in suburban London. He is the author of the Jack McColl novels, Jack of Spies, One Man’s Flag, Lenin's Roller Coaster, and The Dark Clouds Shining; the thriller The Red Eagles; and six books in the John Russell espionage series, set in WWII Berlin: Zoo Station, Silesian Station, Stettin Station, Potsdam Station, Lehrter Station, and Masaryk Station. He lives with his wife, an American acupuncturist, in Guildford, England.

“Grade: A . . . Downing’s mingling of history and thrills makes this a must read.”
—Rocky Mountain News

“Russell is a canny and likable protagonist.”
—BookPage

“Twists and turns aplenty make this espionage novel a superb read full of tension and suspense . . . An amazing piece of fiction which I hope is part of a much larger series.”
—Crimespree Magazine

"One of the most intelligent and persuasive realizations of Germany immediately before the war."
─The Wall Street Journal

"In the elite company of literary spy masters Alan Furst and Philip Kerr . . . [Downing is] brilliant at evoking even the smallest details of wartime Berlin on its last legs."
─Washington Post