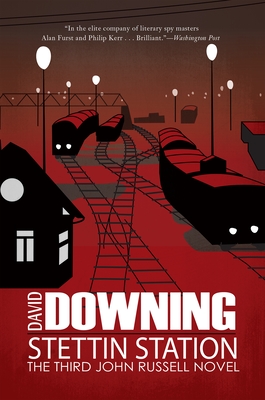 By David Downing
Not Available to Order

This is book number 3 in the A John Russell WWII Spy Thriller series.

In the fall of 1941, Anglo-American journalist John Russell is still living in Berlin, tied to the increasingly alien city by his love for two Berliners: his fourteen-year-old son, Paul, and his longtime girlfriend, Effi. Forced to work for both German and American Intelligence, he's searching for a way out of Germany. Can he escape and take Effi with him?

David Downing grew up in suburban London. He is the author of numerous works of fiction and nonfiction for both adults and children, including four novels featuring Anglo-American journalist John Russell and the nonfiction work Sealing Their Fate: The Twenty-Two Days That Decided World War II. He lives with his wife, an American acupuncturist, in Guildford, England.

“As complex and clever as the best of Kerr and Kanon, and it has spies for added style ... A tightly constructed novel with a complex plot set in a world that is on the verge of a terrible madness. Downing captures all of that and a bit more, with a touch of old-fashioned romance that really does call out for Bergman and Bogart.”
—Globe & Mail

“Downing distinguishes himself by eschewing the easy ways out. He doesn't shy away from portraying the cold brutality of the Third Reich, and his characters are far from stereotypes—they're flawed, confused and real.”
—Michael Schaub, NPR

“[Downing] is at his best with setting and historical detail, and this novel does not disappoint. His sharply drawn descriptions of daily life within the beleaguered Nazi capital ring true, as do the characters that inhabit it. His sense of place is outstanding.”
—Historical Novels Review

“Fans of the intelligent WWII thrillers of Alan Furst and Philip Kerr should enjoy Downing’s atmospheric and tension-filled third novel featuring Anglo-American journalist John Russell . . . With strong vivid prose, the author maintains a high level of suspense throughout, and makes the reader care about his leads.”
—Publishers Weekly

“It is a tale of terror with a thrill-a-page pace.”
—Spinetingler Magazine

“Downing's novels are a glimpse at the human side of the war . . . I highly recommend Stettin Station.”
—Gumshoe Reviews

“A beautifully crafted and compelling thriller with a heart-stopping ending . . . An unforgettable read.”
—Charles Todd, author of the Inspector Ian Rutledge Series

"Downing's outstanding evocation of the times (as masterly as that found in Alan Furst's novels or Philip Kerr's Bernie Gunther series), thematic complexity (as rich as that of John le Carré), and the wide assortment of fully rendered characters provide as much or more pleasure than the plot, where disparate threads are tied together in satisfying and unexpected ways."
—Library Journal, Starred Review

“Downing is brilliant at weaving history and fiction . . . equally clever and unexpected.”
—Toronto Globe and Mail