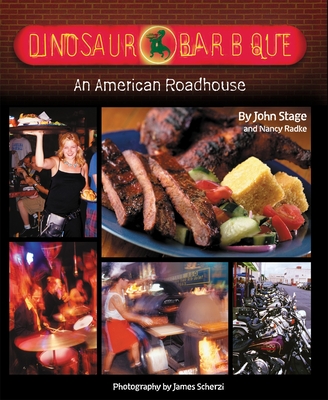 By John Stage, Nancy Radke, James Scherzi (Photographs by)
$27.99
It's Complicated--Contact Us for More Information

Where can you show up for world-class barbecue, stick around for the blues, and shut the place down waxing poetic with some pretty colorful characters? At the Dinosaur Bar-B-Que, of course, the Syracuse-based honky-tonk rib joint known far and wide by bikers, blues musicians, and barbecue aficionados. This first-ever barbecue restaurant cookbook features more than 100 flavor-packed recipes, from starters through desserts, guaranteed to get your motor running.

Join the Spiceman, John Stage, and his co author, Nancy Radke, on a journey into the world of low and slow barbecue and fast and furious grillin’. In Dinosaur Bar-B-Que: An American Roadhouse, you’ll learn the secrets to the Dinosaur’s succulent pit-smoked specialties—like Dinosaur Bar-B-Que Ribs and Home-Style Pulled Pork—in recipes you can cook up in your own backyard. John also shows you how to take traditional BBQ sauce and rev it up to create tempting dishes you can make in a flash:

John even reveals the secret recipes for his famous homemade sides, desserts, and Honey Hush Cornbread. So . . .

Grab that way-too-clean apron off its hook and get ready to flip, slop, slather, and slide your way to barbecue heaven. After all, it ain’t barbecue ’til you get some on you!

John Stage is a co-owner of the Dinosaur Bar-B-Que in New York City, Syracuse, and Rochester, New York. He got into the barbecue business in 1983 when he and his partner, Mike Rotella, sawed a 55-gallon drum in half and took to the road slinging barbecue at biker swap meets, fairs, and festivals. His travels armed him with lots of information and inspiration that he put into action when he opened the Dinosaur Bar-B-Que, a genuine honky-tonk blues and rib joint. The menu reflects John’s own unique barbecue style, which combines traditional pit smoking with distinctive BBQ sauces. This book, John’s first, is the result of years of passiondriven creative cooking, an abiding love of the blues, and a staff and clientele who live for barbecue.

Nancy Radke, CCP (certified culinary professional), is a marketer of Italian food products and a food stylist. She is also the Director of the U.S. Information Office for Parmigiano-Reggiano® cheese. Nancy has lived and traveled extensively in Italy, conducted culinary classes, run a cooking school, and for nine years published an Italian food newsletter. She has also contributed to the Ten Speed Press line of culinary posters.

Designer Holly Boice Scherzi brings her love of type, color, and imagery to the conceptual direction and production of corporate identity programs, packaging, in-store promotional materials, brochures, and catalogs. Her design firm is located in Syracuse, New York, where she produces award-winning work for local, national, and international clients.

“I come from a place where barbecue is not food; it is a way of life. It is a philosophy of human nature. I have rarely had any as good as this.”—President Bill Clinton, on Dinosaur Bar-B-Que

“Though I learned to cook under the watchful eyes of several grandmothers in the apartment building where I lived in Rome, Italy, I now can smoke a mean pork butt thanks to John Stage.”—Nancy Radke

“So, what made this book take off faster than a Hog flying down Interstate 5? Get your copy and find out why everyone is snapping up this unique instruction manual.”—Santa Cruz Sentinel

“[A] kicky book with attitude . . . the jived up flavors and combinations in this book are barbecue heaven!”—Scott Fine's Great Grilling Recipes (formerly On The Grill)