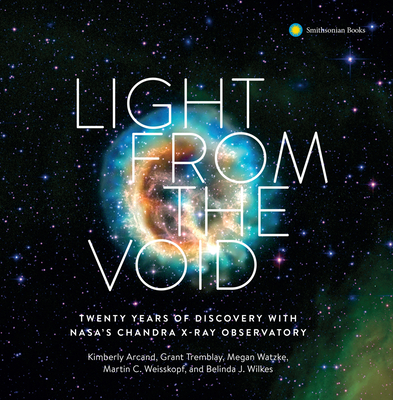 A lavish coffee-table book featuring spectacular images from the Chandra X-Ray Observatory, the most powerful X-Ray telescope ever built

Take a journey through the cosmos with Light from the Void, a stunning collection of photographs from the Chandra X-Ray Observatory's two decades of operation. The book showcases rarely-seen celestial phenomena such as black holes, planetary nebulae, galaxy clusters, gravitational waves, stellar birth and death, and more. Accompanying these images of incredible natural phenomena are captions explaining how they occur. The images start close to home and move outward: beginning with images of the Chandra launch, then moving into the solar system, through the nearby universe, and finally to the most distant galaxies Chandra has observed, the book brings readers on a far-out visual voyage.

The SMITHSONIAN ASTROPHYSICAL OBSERVATORY is a part of the Smithsonian Institution which, in conjunction with the Harvard College Observatory, studies basic physical processes that determine the nature and evolution of the universe. Together they operate the Chandra X-Ray Observatory for NASA. Foreword writers BELINDA WILKES is Director of the Chandra X-Ray Center, and MARTIN WEISSKOPF is the Chandra Project Scientist at NASA Marshall Space Flight Center.

“Hubble is the best known for its stunning photos, but Light from the Void proves that enhancing Hubble imagery with X-ray data from Chandra attains a whole new dimension of beauty. The book has short introductory essays followed by edge-to-edge prints of gorgeous astronomical objects, each one paired with a detailed caption explaining the significance. […] The beautiful images are the main point of this coffee-table book, but there is plenty to learn from the text. – Emily Lakdawalla, The Planetary Society

"...in Light From The Void, a team of five scientists and science communicators specialized in X-ray space telescopes have come together to create a compendium like you've never seen: an informative picture-heavy book of the X-ray Universe. [...] To experience a side of the Universe that's beautiful, educational, but rarely receives the attention that visible light does, don't miss your chance to pick a copy of this one up." – Ethan Siegel, Forbes

"Chandra is overshadowed by its more famous fellow space telescope, Hubble, particularly among the general public (most people have heard of Hubble, but far fewer know about Chandra) in part because x-ray imagery often isn’t as picturesque as the visible and near-infrared imagery that Hubble churns out. That’s rectified in Light from the Void, a new book by several astronomers involved with Chandra. This large-format book includes dozens of color images created with Chandra, often combined with visible and other images. The result is a set of images that are both beautiful and insightful." – The Space Review