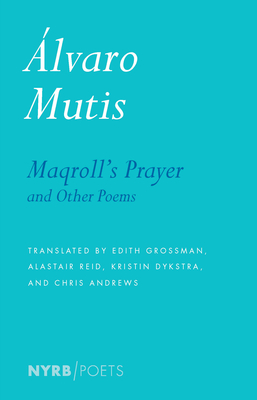 Coming Soon - Available for Pre-Order Now
Because of how it is sold to us we cannot accept a return of this title.

Peer to Gabriel García Marquez and Octavio Paz, Álvaro Mutis is indisputably one of the greatest Latin American authors of the twentieth century, and this collection brings together the best of Mutis's largely unknown body of poetry.

Álvaro Mutis is celebrated internationally as the author of the seven novellas, written between 1986 and 1993, that constitute the legendary and widely loved Adventures and Misadventures of Maqroll. Maqroll, the Gaviero, or watchman, is a wanderer, always in pursuit of love and fortune, even as he knows that neither can or will last.

Few know, however, that Maqroll made his first appearance, and established his myth, not in prose but in poetry. Starting 1948, Mutis published several volumes of poetry influenced by surrealists like Robert Desnos and Pablo Neruda, but with an unmistakable voice of his own, gaining the admiration of Octavio Paz and Gabriel García Márquez, who called him “one of the greatest writers of our time.” This selection of Mutis’s haunting poems has been rendered into English by three of the finest translators of the Spanish language and is published in a bilingual edition.

Colombia-born Álvaro Mutis (1923–2013) was an author of poetry, short stories, and novels. He received many literary awards, including the 1989 Prix Médicis and the 2002 Neustadt International Prize for Literature. NYRB Classics publishes his complete Maqroll series in The Adventures and Misadventures of Maqroll.

Kristin Dykstra’s translations include books by Reina María Rodríguez, Ángel Escobar, and others. She is the co-editor Mandorla: New Writing from the Americas. She lives in Hinesburg, Vermont.

Edith Grossman is an award-winning translator of poetry and prose by contemporary Spanish-language writers, including Gabriel García Márquez and Mario Vargas Llosa. In 2006 she was awarded the PEN/Ralph Manheim Medal for Translation. She lives in New York City.

Alastair Reid (1926–2014) was a poet, translator, and traveler. He published more than forty books, including two books for children, Ounce Dice Trice and Supposing. . . , both available from The New York Review Children’s Collection.