Hanuman: The Devotion and Power of the Monkey God (Paperback) 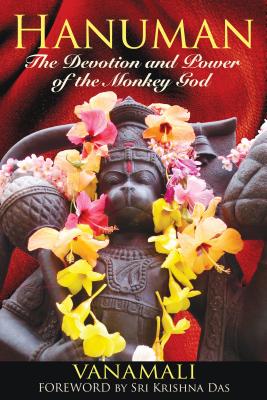 An interpretive look at the stories of Hanuman, one of the most beloved gods of the Hindu pantheon

• Contains 36 of the most important Hanuman stories with commentary on spiritual lessons, yogic practices, and Vedic astrology

• Explains how Hanuman has the ability to bestow strength and devotion

Best known for his role in the Ramayana, Hanuman’s playful nature, amazing physical powers, and selfless devotion to Lord Rama have made him one of the most beloved gods in the Hindu pantheon. As a monkey, he symbolizes the ever-restless human mind. He teaches us that, though everyone is born an animal, anyone can attain the heights of spiritual evolution through perseverance and ardent discipline. Having perfected his mind through bhakti (selfless devotion) to obtain his powers, Hanuman embodies the highest potential we can achieve.

In this book, Vanamali recounts 36 legendary Hanuman stories--from his birth to his adventures in the Ramayana--and reveals the spiritual lessons, yogic practices, and Vedic astrology aspects they contain. Vanamali shows how Hanuman has the ability to bestow selfless devotion and strength to his devotees and that following his example is the surest path to attracting the blessing of Rama.

Mataji Devi Vanamali has written seven books on the gods of the Hindu pantheon, including Hanuman, The Play of God, The Song of Rama, and Shakti, as well as translating the Bhagavad Gita. She is the founder and president of Vanamali Gita Yogashram, dedicated to sharing the wisdom of Sanatana Dharma and charitable service to children. She lives at the Vanamali ashram at Rishikesh in northern India.

“With spellbinding luminosity, master storyteller Vanamali propels the reader into transcendental realms of inspiring valor and sublime devotion. With illuminating authenticity, Vanamali, again and again, showers us with the ambrosia of Sri Hanuman’s devotion to Lord Rama.”
— Arvind Bruce Burger, author of Esoteric Anatomy: The Body as Consciousness

“Vanamali Devi has done a beautiful and inspiring job of making Hanuman a palpable life, worthy of love, devotion, and respect.”
— Nayaswami Kriyananda, author and swami of the Giri (Mountain) branch of the ancient Swami Order

“Vanamali’s work is Universal and helpful for people in all walks of life.”
— Shivarudra Balayogi Maharaj

"A big plus for the restless reader is that each story is self-contained. Surely if a monkey can embody our highest human potential, there is hope for all of us."
— Whole Life Times, June 2010

". . . this book is like a wonderfully detailed refresher course that also has some new insights on all things Hanuman. However, I think it would also work well for someone who has always wondered about the Hindu monkey deity, but hasn't wanted to go through assorted religious texts to learn more."
— The Magical Buffet, June 2010

"Beautifully written, engrossing and inspiring, it would be difficult to praise this book too highly."
— Light of Consciousness, Autumn 2010