The Magic Years: Scenes from a Rock-And-Roll Life (Paperback) 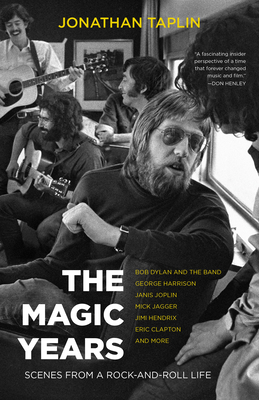 Now in paperback: a "candid, insightful memoir . . . of a time that forever changed music and film" (Don Henley) "The Magic Years reads like a Magical Mystery Tour of music, loss, beauty, family, justice, and social upheaval. It contains true magic, and true inspiration, as do the years, the people, and the story Taplin tells."--Rosanne Cash Jonathan Taplin's extraordinary journey has put him at the crest of every major cultural wave in the past half century: he was tour manager for Bob Dylan and the Band in the '60s, producer of major films in the 70s, creator of the Internet's first video-on-demand service in the 90s, and a cultural critic and author writing about technology in the new millennium. His is a lifetime marked not only by good timing but by impeccable instincts--from the folk scene to Woodstock, Hollywood's rebellious film movement, and beyond. With cameos by Janis Joplin, Jimi Hendrix, Martin Scorsese, and countless other icons, The Magic Years is both a rock memoir and a work of cultural criticism from a key player who watched a nation turn from idealism to nihilism. Taplin offers a clear-eyed roadmap of how we got here and makes a convincing case for art's power to deliver us from "passionless detachment" and rekindle our humanism.