My Irish Table: Recipes from the Homeland and Restaurant Eve [A Cookbook] (Hardcover) 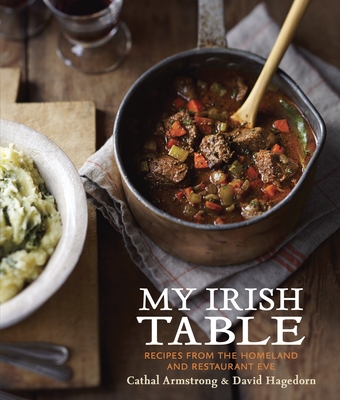 By Cathal Armstrong, David Hagedorn
$35.00
It's Complicated--Contact Us for More Information

The debut cookbook from Cathal Armstrong featuring 130 recipes showcasing modern Irish fare, along with stories about Armstrong's journey from Dublin to Washington, DC, and becoming an internationally recognized four-star chef, the owner of seven successful food and drink establishments, and a leader in the sustainable-food movement.

With its moderate climate and amazing natural resources, Ireland is a modern-day Eden, boasting lush, bountiful produce, world-renowned dairy, plentiful seafood, and grass-fed meats. In My Irish Table, sustainable food movement leader and four-star chef Cathal Armstrong celebrates the food of his homeland and chronicles his culinary journey from Dublin to Washington DC, where he runs seven beloved and critically lauded restaurants.
Featuring 130 delicious recipes—from Kerrygold Butter-Poached Lobster with Parsnips to Irish Stew, Shepherd’s Pie, and Mam’s Apple Pie—My Irish Table draws on Armstrong’s Irish upbringing as well as his professional experience and French culinary training. In his hands, Irish food is comforting yet elegant, rustic yet skillful, and My Irish Table invites you into his kitchen to explore the vibrant traditions and rich culinary landscape of the Emerald Isle.

Dublin born, CATHAL ARMSTRONG is an internationally recognized chef with seven restaurants in the Washington, DC, area. Food & Wine magazine called him “a one-man urban-renewal engine” who kicked off a dining revival in Old Town using French techniques and local produce. Armstrong was a James Beard Best Chef: Mid-Atlantic nominee and was named one of Food & Wine’s  “10 Best New Chefs 2006” and “50 Hall of Fame Best New Chefs.” He won the Best Chef Award from the Restaurant Association of Metropolitan Washington, DC, in 2007, and the White House honored him as a “Champion of Change” for his work on ending childhood obesity and his involvement in improving the school lunch system. Cathal has been featured in Oprah, Food & Wine, Southern Living, and Martha Stewart.

DAVID HAGEDORN was a chef and restaurateur for 25 years before becoming a food writer, chiefly for the Washington Post. His articles appear in metropolitan dailies throughout the country. He is the author, with Todd and Ellen Gray, of The New Jewish Table and is currently working on other book projects.

“Cathal’s culinary journey from Dublin to Restaurant Eve in Virginia makes riveting reading. This talented young man didn’t ‘lick it off a stone’, as we say in Ireland. His passion for food began in his Da’s vegetable garden, was fostered at his mother’s table, and further ignited by his childhood travels in France. The end result is a super talented young Irish chef with real values and buckets of talent of whom we can be truly proud.”
—Darina Allen, author of Irish Traditional Cooking and Forgotten Skills of Cooking

“This is a scrumptious gathering of everything Irish. It has the haughty (foie gras with black pudding and pears) and the humble (cheese on toast), the familiar (a curing brine for ham) and the unusual (a homey dish called Dublin Coddle). Along the way you’ll meet Da and his garden and Mam and her array of stews (beef, Irish, and President Obama’s chicken). These are recipes you dare not live without.”
—Phyllis Richman, former Washington Post restaurant critic

“Cathal has that rare combination of deep civic mindedness, compassion, and culinary talent. This book is full of wonderful recipes to explore, from a Saint Patrick’s Day roast leg of lamb with herb pesto to simple, classic brown bread. In the fine spirit of Darina Allen, Cathal is preserving Irish foodways, celebrating their rich traditions, and breathing new life into them.”
—Alice Waters, proprietor of Chez Panisse and author of The Art of Simple Food

“In this warm and personal tribute to Irish cuisine, Cathal Armstrong invites us to come home with him to his family’s kitchen, and celebrates his roots through the lens of an Irish chef cooking in America. Reading this book could make anyone wish they were Irish. Cooking from it will make you feel as if you are.”
—Patrick O’Connell, author of Patrick O’Connell’s Refined American Cuisine