The Chili Cookbook: A History of the One-Pot Classic, with Cook-off Worthy Recipes from Three-Bean to Four-Alarm and Con Carne to Vegetarian (Hardcover) 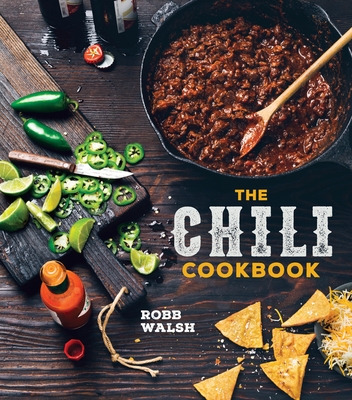 By Robb Walsh
$18.99
It's Complicated--Contact Us for More Information

Americans love chili. Whether served as a hearty family dinner, at a potluck with friends, or as the main dish at a football-watching party, chili is a crowd-pleaser. It’s slathered over tamales in San Antonio, hot dogs in Detroit, and hamburgers in Los Angeles. It’s ladled over spaghetti in Cincinnati, hash browns in St. Louis, and Fritos corn chips in Santa Fe.

In The Chili Cookbook, award-winning author Robb Walsh digs deep into the fascinating history of this quintessential American dish. Who knew the cooking technique traces its history to the ancient Aztecs, or that Hungarian goulash inspired the invention of chili powder?

Fans in every region of the country boast the “one true recipe,” and Robb Walsh recreates them all—60 mouth-watering chilis from easy slow-cooker suppers to stunning braised meat creations. There are beef, venison, pork, lamb, turkey, chicken, and shrimp chilis to choose from—there is even an entire chapter on vegetarian chili. The Chili Cookbook is sure to satisfy all your chili cravings.

Veteran food writer and three-time James Beard Award winner ROBB WALSH is the author of more than a dozen cookbooks, including the iconic Tex-Mex Cookbook and Legends of Texas Barbecue. A former restaurant reviewer for the Austin Chronicle, Houston Press, and Houstonia Magazine, Walsh lives in Houston, Texas, and co-owns El Real Tex-Mex Cafe with chef Bryan Caswell. He is a cofounder and board member of Foodways Texas.

"Robb Walsh’s new book embraces, examines, and celebrates all variety of chili pepper stew. Lucky us. Walsh is one of the great chroniclers of Texas foodways, a thoughtful historian and a warm, charming writer to boot, and while many cookbooks are written to be read as much as cooked from, rarely does one so deftly strike a balance between both."
- Eater

“While no individual chili is capable of satisfying everyone, I guarantee every chili fan will find a recipe in The Chili Cookbook that suits their needs. Robb Walsh, a food writer best known for his books on Tex-Mex and barbecue, is about as comprehensive as one can get in single subject cookbook.”
- Epicurious

“As far as I’m concerned, there are only two books on the history of chili: my father’s A Bowl of Red and Robb Walsh’s The Chili Cookbook.”
- Frank X. Tolbert 2

"Walsh is one of food writing's best storytellers, so the book is satisfying even if you never whip out your Dutch oven and get cooking. You should, though: The fascinating tale is best enjoyed with a big bowl of chili con carne. (Walsh's recipe from El Real in Houston is killer.)"
- Serious Eats