I Hope Its Not Over and Goodby: Selected Poems of Everette Maddox (Paperback) 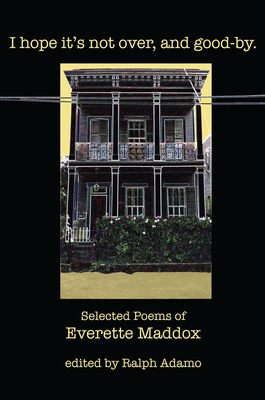 By Everette Maddox, Ralph Adamo (Editor)
$16.95
It's Complicated--Contact Us for More Information

Called the Christ of New Orleans by Andrei Codrescu, Everette Maddox was a New Orleans legend, a poet whose mythos made it hard to know who he really was. Broke and often homeless, but with a distinctive taste for style and glamour, Maddox was a character well suited for the contradictions of New Orleans life. As Ralph Adamo remarks in his introduction, We each have out own Everette, and then we have the poems. In this collection, editor Adamo has selected the best from Maddox's published collections as well as many poems unpublished to date. Adamo's impeccable selection and thematic ordering provide a frame uniquely appropriate to Maddox's work; even the most famous of his poems seems to take on new, surprising dimensions.

Everette Maddox was a poet, who in 1979 co-founded the longest-running poetry reading series in the South at the Maple Leaf Bar in New Orleans. He was born in Montgomery, Alabama, and after studying at the University of Alabama, he was named Poet-in-Residence at Xavier University in 1975. His work has been published in The New Yorker and The Paris Review. He passed away in 1989.