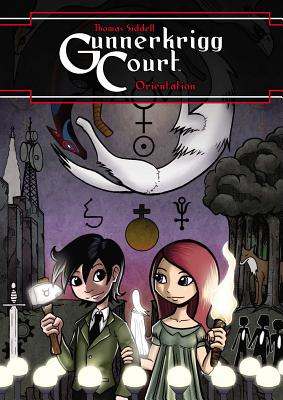 This is book number 1 in the Gunnerkrigg Court series.

Welcome to Gunnerkrigg Court, a school that makes Hogwarts look boring! Antimony and her new friend Kat explore their school, a place with robots, ghosts, living shadows, and body-snatching demons, while Antimony’s own past remains mysterious. The first volume of one of the greatest coming of age webcomics out there.

Antimony Carver is a precocious and preternaturally self-possessed young girl starting her first year of school at gloomy Gunnerkrigg Court, a very British boarding school that has robots running around along side body-snatching demons, forest gods, and the odd mythical creature. The opening volume in the series follows Antimony through her orientation year: the people she meets, the strange things that happen, and the things she causes to happen as she and her new friend, Kat, unravel the mysteries of the Court and deal with the everyday adventures of growing up. Tom Siddell’s popular and award-winning webcomic (www.gunnerkrigg.com) is here collected in paperback for the first time.

Thomas Siddell is English, and resides in Birmingham. He has a day job as an animator for a video game company, and he rides the bus to work every day. He hates Boxbot. He really, REALLY hates Boxbot.