Summertime All the Cats Are Bored (Paperback) 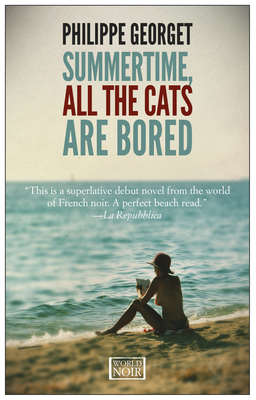 Summertime, All the Cats Are Bored is the perfect mystery beach read with what might be the best title ever.  A white-knuckle thriller with a delicious sense of place, it’s set in the Mediterranean resort town of Perpignan, around a series of murders and kidnappings. A retiree finds a dead woman on the beach; then, two detectives are brought in to investigate a disappearance which quickly becomes tied to another, and then we're off to the races. Kick back and stay up late with this winner.

— From Summertime, All the Cats Are Bored

In shade of a mast bobbing o'er the wave
She waits and waits, a patient slave
The house of stone will be her grave.

Who does what, who catches who?
Who's the cat, who the mouse, who?

It’s the middle of a long hot summer on the French Mediterranean shore and the town is teeming with tourists. Sebag and Molino, two tired cops who are being slowly devoured by dull routine and family worries, deal with the day’s misdemeanors and petty complaints at the Perpignan police headquarters. But then a young Dutch woman is found murdered on a beach at Argelès, and another one disappears without a trace in the alleys of the city. Is it a serial killer obsessed with Dutch women? Maybe. The media senses fresh meat and moves in for the feeding frenzy.

Out of the blue, Inspector Gilles Sebag finds himself thrust into the middle of a diabolical game. In order to focus on the matter at hand, he will have to put aside his cares, forget his suspicions about his wife’s unfaithfulness, ignore his heart murmur, and get over his existential angst. But there is more to the case than anyone suspects.

Philippe Georget was born in Épinay-sur-Seine in 1963. He works as a TV news anchorman for France-3. A passionate traveler, in 2001 he travelled the entire length of the Mediterranean shoreline with his wife and their three children in an RV. He lives in Perpignan. Summertime, All the Cats Are Bored, his debut novel, won the SNCF Crime Fiction Prize and the City of Lens First Crime Novel Prize.

Steven Rendall has translated more than sixty books from French and German, including The Art and Critique of Forgetting, which won the Modern Language Association of America, Aldo and Jeanne Scaglione Prize for Translation. He was formerly a professor of Romance Languages at the University of Oregon and editor of the magazine Comparative Literature.

Praise for Summertime, All the Cats Are Bored

"This is a superlative debut novel from the world of French noir. A perfect beach read."
—La Repubblica

"Gilles Sebag, an astute cop despite himself, is a tremendously well rounded character, one of those literary creations that promises to have a long life in fiction."
—D-La Repubblica

"Philippe Georget has us hooked on the first page and doesn't let us go, masterfully guiding his narrative to its final denouement."
—Pol'Art Noir

"In Georget's novel the scents of the Mediterranean and of Spain, the cosmopolitanism of Perpignan are as much characters as the two investigators, Sebag and Molino."
—Obiwi