Red or Dead: A Novel (Paperback) 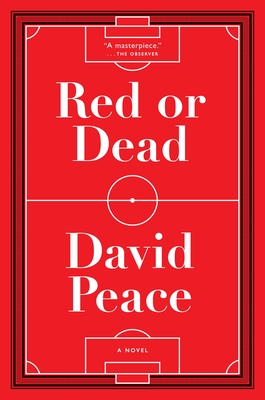 "[T]he stuff of great literature." —The New York Times | "Red or Dead is a winner." —The Washington Post

The place where the swinging sixties started – Liverpool, England, birthplace of the Beatles – wasn’t so swinging. Amid industrial blight and a bad economy, the port town’s shipping industry was going bust and there was widespread unemployment, with no assistance from a government tightening its belt. Even the Beatles moved to London.

Into these hard times walked Bill Shankly, a former Scottish coal miner who took over the city’s perpetually last-place soccer team. He had a straightforward work ethic and a favorite song – a silly pop song done by a local band, “You’ll Never Walk Alone.” Soon he would have entire stadiums singing along, tens of thousands of people all dressed in the team color red . . . as Liverpool began to win . . .

And soon, too, there was something else those thousands of people would chant as one: Shank-lee, Shank-lee . . .

In Red or Dead, the acclaimed writer David Peace tells the stirring story of the real-life working-class hero who lifted the spirits of an entire city in turbulent times. But Red or Dead is more than a fictional biography of a real man, and more than a thrilling novel about sports. It is an epic novel that transcends those categories, until there’s nothing left to call it but – as many of the world’s leading newspapers already have – a masterpiece.

David Peace – named as one of Granta’s Best of Young British Novelists in 2003 – was born and brought up in Yorkshire, England. He is the author of the Red Riding Quartet (Nineteen Seventy-four, Nineteen Seventy-seven, Nineteen Eighty, and Nineteen Eighty-three), which was adapted into a three-part BBC series; GB84, which was awarded the James Tait Black Memorial Prize; and The Damned Utd, which was adapted into a film starring Michael Sheen. Tokyo Year Zero, the first part of his acclaimed Tokyo Trilogy, was published in 2007, and the second part, Occupied City, in 2009.

“I’d offer the British P.M. Red or Dead, David Peace’s demented novel about real-life soccer coach Bill Shankly... The novel is barking mad, but quite brilliant, and is a monument to a kind of magnificent decency once at the core of British life, but now rapidly fading."
—Kazuo ishiguro, New York Times Book Review

“As both postmodern epic and ultimate sports novel, Red or Dead is a winner.”
—Washington Post

“Red or Dead is hypnotic, the words casting a spell that verges on the shamanistic….[it] creates the most remarkable, operatic sweeps of emotion in the reader... This is the stuff of great literature.”
—New York Times Book Review

“Sprawling, ambitious and heartbreaking, it's one of the best sports novels in recent years."
—NPR, Best Books of 2014

“It’s about so much more than soccer. It’s about politics, obsession, community—plus, what could be more British than football?”
—Condé Nast Traveler, 10 Books to Inspire Your Next Trip to the United Kingdom

“Red or Dead might be seen as an elegy for that period when the game was played by and for the working classes and perhaps even seemed an authentic expression of their collectivist sensibility... In writing an elegy for Bill Shankly’s world, then, Peace suggests that what has been lost goes far beyond sports. Or to put it another way, he shows us ourselves in soccer."
—The Millions

“David Peace’s writing reverberates in your head, pulling you along headfirst into the story... Red or Dead is a feat of writing. The manner in which Peace shares this history with us is just as important as the story itself. It’s not often that writing can transport you through style. Peace more than just succeeds in this. He excels."
—Preeti Chhibber, Book Riot's Books of the Year

“Truly brave and utterly heroic . . . I don’t think I’ve ever read anything quite like Red or Dead before. Not ever.”
—The Goldsmiths Prize shortlist citation

“I want to go out and knock on doors like a Jehovah’s Witness and read this book to people.”
—The Observer

“An epic that has more in common with Beowulf or The Iliad than with the conventional sports novel.”
—The Times of London

“The writing is honed, sculpted, poetic . . . It doesn’t matter if you don’t follow the game, this is also a profound investigation of the tension between aspiration and the constraints of time, the very essence of the human condition.”
—Metro

“A book about the choices by which we live and die, the moments that make us feel alive, and those that choke our souls. It is a masterpiece. Make no mistake of that. A masterpiece.”
—The Quietus

“An extraordinary piece of writing.”
—The Independent

“A story of triumph . . . one that might be quoted for decades.”
—Kirkus

“In Red or Dead, the acclaimed writer David Peace tells the stirring story of the real-life working-class hero who lifted the spirits of an entire city in turbulent times. But Red or Dead is more than a fictional biography of a real man, and more than a thrilling novel about sports. It is an epic novel that transcends those categories, until there’s nothing left to call it but—as many of the world’s leading newspapers already have—a masterpiece.”
-Book Riot's 100 Must Read Indie Press Books