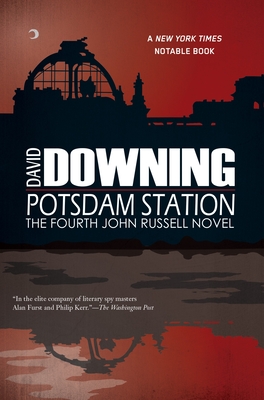 This is book number 4 in the A John Russell WWII Spy Thriller series.

In April 1945, Hitler’s Reich is on the verge of extinction. Assaulted by Allied bombs and Soviet shells, ruled by Nazis with nothing to lose, Berlin has become the most dangerous place on earth.

John Russell’s son Paul is stationed on the Eastern Front with the German Army, awaiting the Soviets’ final onslaught. In Berlin, Russell’s girlfriend Effi has been living in disguise, helping fugitives to escape from Germany. With a Jewish orphan to care for, she’s trying to outlast the Nazis.

Russell hasn’t heard from either of them since fleeing Germany in 1941. He is desperate to find out if they’re alive and to protect them from the advancing Red Army. He flies to Moscow, seeking permission to enter Berlin with the Red Army as a journalist, but when the Soviet’s arrest him as a spy, things look bleak—until they find a use for him that has him parachuting into Berlin behind German lines.

David Downing grew up in suburban London. He is the author of numerous books for adults and children, including four novels featuring Anglo-American journalist John Russell. He lives with his wife, an American acupuncturist, in Guildford, England.

“John Russell has always been in the thick of things in David Downing’s powerful historical novels set largely in Berlin . . . Downing provides no platform for debate in this unsentimental novel, leaving his hero to ponder the ethics of his pragmatic choices while surveying the ground level horrors to be seen in Berlin.”
—The New York Times Book Review

“Reminiscent of Woody Allen’s Zelig, Russell, the hero of Downing’s espionage series, can’t seem to resist inserting himself into climactic moments of the 20th century . . . Downing has been classed in the elite company of literary spy masters Alan Furst and Philip Kerr . . . That flattering comparison is generally justified. If Downing is light on character study, he’s brilliant at evoking even the smallest details of wartime Berlin on its last legs . . . Given the limited cast of characters, Downing must draw on almost Dickensian reserves of coincidences and close calls to sustain the suspense of his basic hide-and-seek story line. That he does ingeniously. It helps to read Downing’s novels in order, but if Potsdam Station is your first foray into Russell’s escapades, be forewarned that you may soon feel compelled to undertake a literary reconnaissance mission to retrieve and read the earlier books.”
—Washington Post

“The echo of the Allied bombings and the crash of the boots of the invading Russians permeate the pages in which David Downing vividly does justice to the drama . . . The book is a reminder of what happened and those who allowed it to happen . . . The book lives up to the others in the Russell series, serving as yet one more reminder of a world too many have entirely forgotten.”
—Washington Times

“Downing is brilliant at weaving history and fiction, and this plot, with its twists and turns—all under the terrible bombardment of Berlin and the Third Reich’s death throes—is as suspenseful as they come. The end, with another twist, is equally clever and unexpected.”
—Toronto Globe and Mail

“The main attraction is the tragic mis-en-scène of a once-beautiful city undergoing the ravages of modern warfare, a wide-angle synthesis of scenes and snapshots from the history books. A wide canvas painted with broad strokes.”
—Kirkus Reviews

“Gripping . . . Downing convincingly portrays the final days of the Nazis in power, and his characters are rich enough to warrant a continuation of their stories, even after the war.”
—Publishers Weekly

Praise for the John Russell Series:

“Will have readers clamoring for a sequel.”
—BookPage

“An extraordinary evocation of Nazi Germany on the eve of war, the smell of cruelty seeping through the clean modern surface.”
—C. J. Sansom, author of Revelation

“Wonderful…. Downing’s mingling of history and thrills makes this a must read.”
—Rocky Mountain News

“A beautifully crafted and compelling thriller with a heart-stopping ending as John Russell learns the personal faces of good and evil. An unforgettable read.”
—Charles Todd, author of the Inspector Ian Rutledge Series