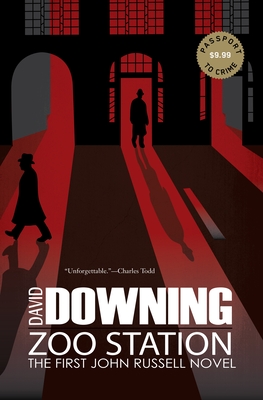 By David Downing
Not Available
Available with a Delay: On Order at Supplier: Email online@portersquarebooks.com for More Info

This is book number 1 in the A John Russell WWII Spy Thriller series.

Run through all of Alan Furst?  Caught up with Philip Kerr?  Long since read the original Eric Amblers? Despair not - David Downing's British journo/spy John Russell fills the bill nicely. Zoo Station is the first of the "Station" series (the titles reference German train stations).

"In the elite company of literary spy masters Alan Furst and Philip Kerr . . . [Downing is] brilliant at evoking even the smallest details of wartime Berlin."─Washington Post

Berlin, 1939: Anglo-American journalist John Russell survives in Nazi Germany by keeping his head down. He writes human-interest pieces for British and American papers, avoiding the investigative journalism that could get him deported. But war is on the horizon, and every day is fraught with new risks.

When an acquaintance from his communist days approaches him to do some work for the Soviets, Russell is reluctant, but he agrees in hopes that it will allow him to keep his family together. One dangerous assignment leads to another, and when the British and the Nazis notice his involvement with the Soviets, Russell is dragged into the murky world of warring intelligence services.

David Downing grew up in suburban London. He is the author of numerous works of fiction and nonfiction for both adults and children, including four novels featuring Anglo-American journalist John Russell and the nonfiction work Sealing Their Fate: The Twenty-Two Days That Decided World War II. He lives with his wife in Guildford, England.

"One of the most intelligent and persuasive realizations of Germany immediately before the war."
—Wall Street Journal

"[A]n unconventional thriller . . . A finely drawn portrait of the capital of a nation marching in step toward disaster as the Nazi rulers count cadence."
—St. Louis Post-Dispatch

"There's nothing better than a well-written WWII thriller. Alan Furst continues to prove it, and now Downing has shown he can produce that creepy sense of paranoia along with the best of them."
—Rocky Mountain News

"If you like your tales spiced with morally ambiguous characters right out of Graham Greene, this is a train you need to be aboard . . . A marvelous return to cerebral espionage."
—January Magazine

"A deeply satisfying, suspenseful novel . . . David Downing's writing is intelligent and strong; his portrayal of issues and conflicts, clear and compelling . . . His imagery is so evocative that readers will feel they are watching a classic film, like Casablanca."
—Mystery Scene

"One of the most intelligent and persuasive realizations of Germany immediately before the war."
─Wall Street Journal

"In the elite company of literary spy masters Alan Furst and Philip Kerr . . . [Downing is] brilliant at evoking even the smallest details of wartime Berlin on its last legs."
─Washington Post