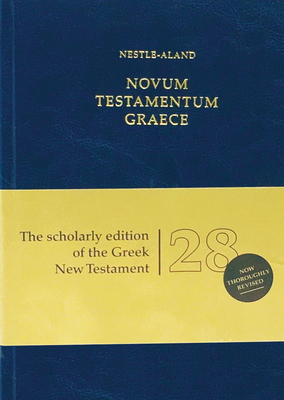 By Eberhard Nestle (Editor), Kurt Aland (Editor)
$79.95
It's Complicated--Contact Us for More Information

Following intensive preparatory work, the Nestle-Aland 28th Edition (NA28) of the Novum Testamentum Graece is now available. This standard and globally preeminent reference among Greek New Testament editions has been fundamentally revised and improved. The structure of the critical apparatus was simplified and includes the combination of variants using sed or et and the distinction between consistently cited witnesses of the first and second order have now been removed.

Additionally, the readings of the newly discovered Papyri 117-127 are listed for the first time, opening up interesting perspectives particularly for the Acts of the Apostles. In the Catholic Epistles, this edition has been made consistent with the Editio Critica Maior. This led to more than 30 modifications in the main text and resulted in a critical apparatus which is newly compiled in its entirety for this section and includes a new selection of witnesses and variants. The cross-references in the margin were also systematically revised and supplemented mainly with references to early Jewish literature.

The Institute for New Testament Textual Research is located at the University of Munster. Their central task is to research the textual history of the New Testament and to reconstruct its Greek initial text on the basis of the entire manuscript tradition, the early translations and patristic citations. Foremost among the results of this research is the ongoing publication of the Editio Critica Maior. The Institute produces several more editions and a variety of tools for NT scholarship, including the concise editions known as the Nestle-Aland Novum Testamentum Graece and the UBS Greek New Testament.