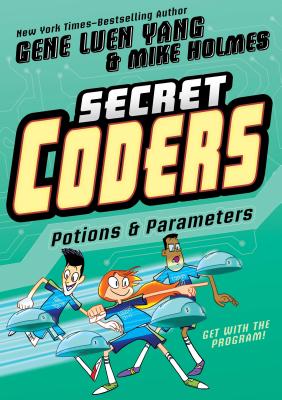 By Gene Luen Yang, Mike Holmes (Illustrator)
$18.99
It's Complicated--Contact Us for More Information

This is book number 5 in the Secret Coders series.

Dr. One-Zero won't stop until the whole town—no, the whole world—embraces the "true happiness” found in his poisonous potion, Green Pop. And now that he has the Turtle of Light, he’s virtually unstoppable.

There's one weapon that can defeat him: another Turtle of Light. Unfortunately, they can only be found in another dimension! To open a portal to this new world, Hopper, Eni, and Josh's coding skills will be put to the test.

Gene Luen Yang writes, and sometimes draws, comic books and graphic novels. As the Library of Congress’s fifth National Ambassador for Young People’s Literature, he advocates for the importance of reading, especially reading diversely. His graphic novel American Born Chinese, a National Book Award finalist and Printz Award winner, has been adapted into a streaming series on Disney+. His two-volume graphic novel Boxers & Saints won the LA Times Book Prize and was a National Book Award finalist. His nonfiction graphic novel Dragon Hoops received an Eisner Award and a Printz honor. His other comics works include Secret Coders (with Mike Holmes), The Shadow Hero (with Sonny Liew), as well as Superman Smashes the Klan and the Avatar: The Last Airbender series (both with Gurihiru). In 2016, he was named a MacArthur Foundation Fellow.

Mike Holmes has drawn for the comics series Secret Coders, Bravest Warriors, Adventure Time, and the viral art project Mikenesses. His books include the True Story collection (2011), This American Drive (2009), and Shenanigans. He lives with a cat named Ella, who is his best buddy.

Praise for the Secret Coders series:

"Gene Luen Yang’s talent is prodigious, his enthusiasm contagious . . . Even this confirmed technophobe was ready to learn coding." —Katherine Applegate, author of Crenshaw and The One and Only Ivan

"By the end of Secret Coders, readers will learn the three major ways that code is organized, right alongside Hopper and Eni, not as something dry or rote, but something transformative." —Wired

"While the coding instruction's as top-notch as ever, in this installment it's interpersonal dynamics and characters that, satisfyingly, take center stage."—Kirkus