The Mind of St. Paul (Paperback) 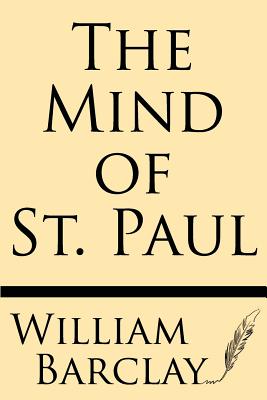 THE MIND OF ST PAUL
By William Barclay
Contents I. The Man of Two Worlds - The World of the Jew
II. The Man of Two Worlds - The World of the Greek
III. Paul's Thinking about God
IV. The Divine Initiative
V. The Call of God
VI. Paul's Thinking about Jesus Christ
VII. The Incarnation
VIII. The Work of Christ
IX. The Death of Christ
X. The Risen Christ
XI. In Christ
XII. Paul's Conception of Faith
XIII. The Essential Grace
XIV. Paul's Thinking about the Holy Spirit
XV. Paul's Thinking about Sin
XVI. Paul's Conception of the Flesh
XVII. The Second Coming in the Thought of Paul
XVIII. The Mind of Paul Concerning the Church
Preface These chapters originally appeared as a series of weekly articles in the pages of The British Weekly. I have to thank the previous editor of that paper, Rev. Shaun Herron, for giving me the opportunity to write them in the first place, and the present editor, Rev. Denis Duncan, for now giving me permission to republish them in book form. To the original series I have added two chapters, one on Sin and the other on the Church in the thinking of Paul. These chapters do not in any way claim to be an exhaustive and complete Theology of Paul. I have simply gone direct to the Pauline letters to find out what Paul said and thought on certain great subjects. Their aim will be fulfilled, if they send people back to the reading of Paul's letters themselves. WILLIAM BARCLAY Trinity College,
Glasgow,
February, 1958
Chapter 1 Excerpt CHRISTIANITY began with one tremendous problem. Clearly the message of Christianity was meant for all men. It was because God so loved the world that He sent His Son (John 3: 16). It was Jesus' confidence that, if He was lifted up, He would draw all men unto Him (John 12: 32). The Church regarded it as her commission that she must go and teach all nations (Matthew 28: 19). It was clear that Christianity had a message for all the world, and that unless that message was delivered, the Church would fail in her God-given duty. But the fact remained that Christianity was cradled in Judaism; and, humanly speaking, no message which was meant for all the world could ever have had a more unfortunate cradle. The Jews were involved in a double hatred - the world hated them and they hated the world. No nation was ever more bitterly hated than the Jews. Cicero called the Jewish religion "a barbarous superstition" (Cicero, Pro Flacco 28); Tacitus called the Jewish nation "the vilest of people" (Tacitus, Histories 5: 8). Anti-semitism is no new thing; it flourished in the ancient world. . . ------------------------------------------------------------------------------------------------------------------------------------------ Windham Press is committed to bringing the lost cultural heritage of ages past into the 21st century through high-quality reproductions of original, classic printed works at affordable prices. This book has been carefully crafted to utilize the original images of antique books rather than error-prone OCR text. This also preserves the work of the original typesetters of these classics, unknown craftsmen who laid out the text, often by hand, of each and every page you will read. Their subtle art involving judgment and interaction with the text is in many ways superior and more human than the mechanical methods utilized today, and gave each book a unique, hand-crafted feel in its text that connected the reader organically to the art of bindery and book-making. We think these benefits are worth the occasional imperfection resulting from the age of these books at the time of scanning, and their vintage feel provides a connection to the past that goes beyond the mere words of the text.