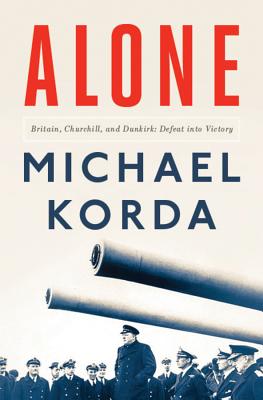 By Michael Korda
$29.95
It's Complicated--Contact Us for More Information

If you’ve seen Christopher Nolan’s film, Dunkirk, and want to learn more, try Alone. Korda’s book is a compelling and detailed examination of the events leading up to the beginning of World War II through the evacuation of Allied troops at Dunkirk interspersed with Korda’s own memoir of his illustrious, movie-making, emigre family.

An epic of remarkable originality, Alone captures the heroism of World War II as movingly as any book in recent memory. Bringing to vivid life the world leaders, generals, and ordinary citizens who fought on both sides of the war, Michael Korda, the best-selling author of Clouds of Glory, chronicles the outbreak of hostilities, recalling as a prescient young boy the enveloping tension that defined pre-Blitz London, and then as a military historian the great events that would alter the course of the twentieth century.

For indeed, May 1940 was a month like no other. The superior German war machine blazed into France, as the Maginot Line, supposedly "as firmly fixed in place as the Pyramids," crumbled in days. With the fall of Holland and Belgium, the imminent fall of Paris, the British Army stranded at Dunkirk, and Neville Chamberlain’s government in political freefall, Winston Churchill became prime minister on this historical nadir of May 10, 1941. Britain, diplomatically isolated, was suddenly the only nation with the courage and the resolve to defy Hitler.

Against this vast historical canvas, Korda relates what happened and why. We first meet him at the age of six, surrounded by his glamorous movie family: his stage actress mother; his elegant father, Vincent, soon to receive an Academy Award; and his devoted Nanny Low, with whom he cites his evening prayers. Even the cheery BBC bulletins that Michael listened to every night could not mask the impending catastrophe, the German invasion so certain that the young boy, carrying his passport on a string around his neck, was evacuated to Canada on an ocean liner full of children.

Such alarm was hardly exaggerated. No one, after all, could have ever imagined that the most unlikely flotilla of destroyers—Dutch barges, fishing boats, yachts, and even rowboats— would rescue over 300,000 men off the beach at Dunkirk and home to England. The miraculous return of the army was greeted with a renewed call for courage, and in the months that followed, the lives of tens of millions would be inexorably transformed, often tragically so, by these epochal weeks of May 1940.

It is this pivotal turning point in world history that Korda captures with such immediacy in Alone, a work that triumphantly demonstrates that even the most calamitous defeats can become the most legendary victories.

Michael Korda is the best-selling author of Hero, Clouds of Glory, and Charmed Lives. The former editor-in-chief of Simon and Schuster, he was awarded the Order of Merit of the Republic of Hungary for his participation in the Hungarian Revolution of 1956. He lives in Pleasant Valley, New York.

Entertaining. . . This crucial time is recounted by someone who witnessed those years as a child. Korda, a longtime book editor before becoming a full-time author, is like a charming dinner party host offering his personal experience of history. . . A fine introduction for anyone new to this fulcrum point of the 20th century.
— Thomas E. Ricks - New York Times Book Review

Where Korda's account differs from many similar Dunkirk histories is in a wide trawl of simultaneous social history alongside the military and political events. . . The book is also lavishly illustrated with contemporary photographs—many of them unfamiliar. Anyone wanting to explore the history behind Christopher Nolan's recent film could do a lot worse than start here.
— Nigel Jones - Times Literary Supplement

A swiftly paced, illuminating account of events at the opening of World War II in Europe, recounting ‘a military defeat with a happy ending.’ Revived in part thanks to Christopher Nolan's 2017 film Dunkirk, the history of the British Expeditionary Force is compelling even in its barest bones. Korda (Clouds of Glory: The Life and Legend of Robert E. Lee, 2014, etc.), noted as both a historian and publisher, brings a personal touch to the story with that of his own family's flight from Europe a step or two ahead of the advancing Nazis. . . . An excellent revisitation of a critically important set of battles that, once a byword for courage, have faded in memory.

The incredible, almost miraculous story of what happened at Dunkirk in the year 1940—and why—is unfolded in Alone with great narrative skill and superb delineation of a highly interesting cast of characters, including, importantly, the author himself and his own remarkable family.

The story of the coming of World War Two, the fall of France, and the ‘miracle’ at Dunkirk has been told many times before, but Michael Korda injects this familiar tale with fresh poignancy and compelling drama as only the finest historians can do…[His] memories as a young boy, watching his famous film family deal with the onset of war, give his elegant narrative an added dimension that makes it compulsively readable.
— Max Boot

Michael Korda, who has often extended our understanding of so many diverse subjects, has accomplished another masterpiece in Alone. Dealing with Britain’s desperate situation as France fell, he shows how the evacuation from Dunkirk became the inspiration for eventual British victory. One of Korda’s best.

A fascinating mix of political history and personal reminiscence. I personally had almost the same experience, and was transported back seventy-five years.
— John Julius Norwich

Michael Korda’s cool dissection of the battle of Dunkirk and its aftermath makes wonderful reading: he’s as able a historian as he was an editor.
— Larry McMurtry