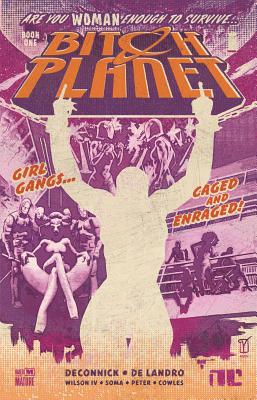 This is book number 1 in the Bitch Planet series.

In a dystopian future, women who fight against the patriarchal regime are sent to an offworld prison colloquially referred to as “Bitch Planet.” A story about women who refuse to be boxed in and despite their society’s best efforts, remain noncompliant.

"...one of the most unique and subversive artifacts of pop culture in recent memory." - Salon.com Seldom do comics burst onto the scene and shatter our worldview by being entirely poignant, raw, and captivating - but then, most comics aren't Bitch Panet. - Entertainment Weekly Eisner Award-nominated writer Kelly Sue DeConnick (Pretty Deadly, Captain Marvel) and Valentine De Landro (X-Factor) team up to bring you the premiere volume of Bitch Planet, a deliciously vicious riff on women-in-prison sci-fi exploitation. In a future just a few years down the road in the wrong direction, a woman's failure to comply with her patriarchal overlords will result in exile to the meanest penal planet in the galaxy. When the newest crop of fresh femmes arrive, can they work together to stay alive or will hidden agendas, crooked guards, and the deadliest sport on (or off ) Earth take them to their maker?