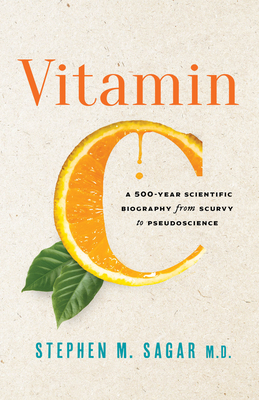 Vitamin C: A 500-Year Scientific Biography from Scurvy to Pseudoscience is the compelling story of the history and science behind vitamin C. Vitamin C begins with scurvy, which afflicted Europe for four hundred years and killed millions. The reasons that a disease whose cure was known from the outset persisted over that time are at once baffling and familiar, and these trials eventually lead to invention of the science of epidemiology. Author Stephen M. Sagar MD then chronicles the discovery of vitamins at the beginning of the twentieth century, a story that encapsulates the rise of a scientific approach to nutrition but with surprising twists and turns. As vitamin science became more acquainted with the mainstream, scientist Linus Pauling reached new heights of fame and influence by popularizing the practice of taking megadoses of vitamin C to prevent colds - a claim that was not necessarily backed by data. This kickstarted the growth of the $40 billion vitamin and supplement industry, which has since prospered all while ignoring science. This unique and engrossing narrative reveals how medical science functions in the real world and how it has changed over the centuries. Featuring swashbuckling sailors, arctic explorers, penny-pinching bureaucrats, academicians with clashing egos, and intrepid scientists working in malaria-infested jungle laboratories, the story of C is in many ways the story of how science gets done (and undone). From the trial and error of early explorers to the scientific breakthroughs made by biochemists and the birth of the modern supplement industry, this revelatory book tells the story of how cherished beliefs, self-interest, and politics often intertwine with scientific progress.

Stephen M. Sagar, MD, brings 40 years' experience in science and medicine to tell a story that integrates the history of science into broader cultural, political and intellectual life. Sagar has a B.A. in American civilization and a M.Sc. in medical science from Brown University and an M.D. from Harvard Medical School. He held faculty positions at Harvard Medical School, the University of California San Francisco, and Case Western Reserve University. He has published over 100 original articles, reviews, and book chapters, including publications in Science, the New England Journal of Medicine and Harrison's Textbook of Internal Medicine. He served as associate editor of the Annals of Neurology. He lives in San Francisco, California.