This Is How They Tell Me the World Ends: The Cyberweapons Arms Race (Paperback) 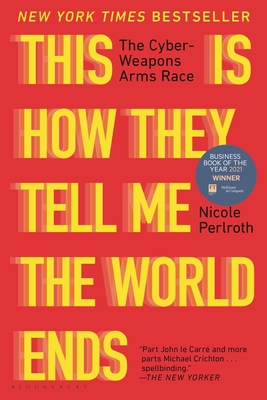 "Written in the hot, propulsive prose of a spy thriller" (The New York Times), the untold story of the cyberweapons market-the most secretive, government-backed market on earth-and a terrifying first look at a new kind of global warfare.

Zero-day: a software bug that allows a hacker to break into your devices and move around undetected. One of the most coveted tools in a spy's arsenal, a zero-day has the power to silently spy on your iPhone, dismantle the safety controls at a chemical plant, alter an election, and shut down the electric grid (just ask Ukraine).

For decades, under cover of classification levels and nondisclosure agreements, the United States government became the world's dominant hoarder of zero-days. U.S. government agents paid top dollar-first thousands, and later millions of dollars-to hackers willing to sell their lock-picking code and their silence. Then the United States lost control of its hoard and the market. Now those zero-days are in the hands of hostile nations and mercenaries who do not care if your vote goes missing, your clean water is contaminated, or our nuclear plants melt down.

Filled with spies, hackers, arms dealers, and a few unsung heroes, written like a thriller and a reference, This Is How They Tell Me the World Ends is an astonishing feat of journalism. Based on years of reporting and hundreds of interviews, New York Times reporter Nicole Perlroth lifts the curtain on a market in shadow, revealing the urgent threat faced by us all if we cannot bring the global cyberarms race to heel.

Nicole Perlroth spent a decade as the lead cybersecurity, digital espionage and sabotage reporter for The New York Times. Her work has received widespread praise from The New Yorker, The New York Review of Books, The Economist, and The New York Times, including mentions in Wired, PBS, NPR, The Wall Street Journal, and The Washington Post, among others. She has been featured as a guest on Fresh Air, The Rachel Maddow Show, CNN, the New York Times podcasts The Daily and Sway, VOX's Pivot podcast, and many more. She lectures at Stanford University and regularly delivers keynote addresses and speeches. She is currently serving as an advisor to the Department of Homeland Security's Cybersecurity and Infrastructure Security Agency (CISA). She also joined the Council on Foreign Relations' Cybersecurity Task Force. She lives with her family in the Bay Area.

“Vivid and provocative.” —The New York Review of Books

“Told in an enthrallingly cinematic style . . . a stark, necessary, thoroughly reported reminder that no matter how strong the safe is, there'll always be someone who can come along and crack it.” —LitHub

“Possibly the most important book of the year . . . Perlroth's precise, lucid, and compelling presentation of mind-blowing disclosures about the underground arms race a must-read exposé.” —Booklist, starred review

“An engaging and troubling account of 'zero-day exploits' . . . This secretive market is difficult to penetrate, but Ms. Perlroth has dug deeper than most and chronicles her efforts wittily.” —The Economist

“[Perlroth] has delivered a five-alarm page turner that weighs the possibility of cyber-cataclysm.” —The Boston Globe

“A masterful inside look at a highly profitable industry that was supposed to make us safer, but has ended up bringing us to the brink of the next world war.” —John Markoff, former New York Times cybersecurity reporter

“Takes a complex subject that has been cloaked in techspeak and makes it dead real for the rest of us.” —Kara Swisher, host of the podcast On with Kara Swisher

“100% gripping. For anyone interested in cybersecurity, whether as student, policymaker, or citizen, it is well worth your read.” —P.W. Singer, author of LIKEWAR

“A rollicking fun trip, front to back, and an urgent call for action before our wired world spins out of our control.” —Garrett M. Graff, Wired, author of New York Times bestseller THE ONLY PLANE IN THE SKY

“A whirlwind global tour that introduces us to the crazy characters and bizarre stories behind the struggle to control the internet. It would be unbelievable if it wasn't all so very true.” —Alex Stamos, Director of the Stanford Internet Observatory and former head of security for Facebook and Yahoo

“The definitive history of cyberwarfare.” —Clint Watts, author of MESSING WITH THE ENEMY

“Will keep you up at night, both unable to stop reading, and terrified for what the future holds.” —Nick Bilton, Vanity Fair, author of AMERICAN KINGPIN

“Nicole Perlroth tells a highly technical, gripping story as if over a beer at your favorite local dive bar. A page-turner.” —Nina Jankowicz, author of How to Lose the Information War

“[A] wonderfully readable new book. Underlying everything Perlroth writes is the question of ethics: What is the right thing to do? Too many of the people she describes never seemed to think about that; their goals were short-term or selfish or both. A rip-roaring story of hackers and bug-sellers and spies that also looks at the deeper questions.” —Steven M. Bellovin, Professor of Computer Science, Columbia University

“The murky world of zero-day sales has remained in the shadows for decades, with few in the trade willing to talk about this critical topic. Nicole Perlroth has done a great job tracing the origin stories, coaxing practitioners into telling their fascinating tales, and explaining why it all matters.” —Kim Zetter, author of COUNTDOWN TO ZERO DAY

“From one of the literati, a compelling tale of the digerati: Nicole Perlroth puts arresting faces on the clandestine government-sponsored elites using 1s and 0s to protect us or menace us-and profit.” —Glenn Kramon, former New York Times senior editor

“Lays bare the stark realities of disinformation, hacking, and software vulnerability that are the Achilles' Heel of modern democracy. I work in this field as a scientist and technologist, and this book scared the bejesus out of me. Read it.” —Gary McGraw, PhD, founder, Berryville Institute of Machine Learning and author of Software Security

“Usually, books like this are praised by saying that they read like a screenplay or a novel. Nicole Perlroth's is better: her sensitivity to both technical issues and human behavior give this book an authenticity that makes its message-that cybersecurity issues threaten our privacy, our economy, and maybe our lives-even scarier.” —Steven Levy, author of Hackers and Facebook

“You MUST read this book-every word.” —Tom Peters, author of In Search of Excellence

“Exposes the motivations and misgivings of the people helping governments hack into our devices. After Perlroth's incisive investigation, there's no excuse for ignoring the costs of the cyber arms race. Indeed, we are already deeply vulnerable.” —Sarah Frier, Bloomberg, author of NO FILTER