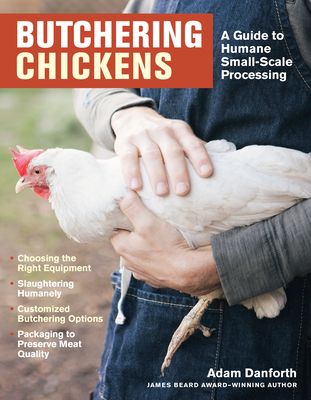 The space, setup, and equipment required to raise and process poultry are minimal when compared to other types of livestock, which is part of what makes chickens such an appealing choice for small-scale meat producers. Expert butcher and teacher Adam Danforth covers the entire slaughtering and butchering process in this photographic guide specifically geared toward backyard chicken keepers and small-farm operations invested in raising meat responsibly. With step-by-step photos, detailed instructions, and chapters dedicated to necessary tools and equipment, essential food safety measures, how to prepare for slaughter and process the birds quickly and humanely, how to break down the carcasses into cuts, and how to package and freeze the cuts to ensure freshness, this comprehensive handbook gives poultry raisers the information they need to make the most of their meat.

Adam Danforth is the author of Butchering Chickens, Butchering Beef, and Butchering Poultry, Rabbit, Lamb, Goat, and Pork, which won both an IACP Award and a James Beard Award. Danforth trained at the professional meat processing program at SUNY Cobleskill, one of the only such programs in the United States, before going to work at Marlow and Daughters in New York City. He leads experiential workshops worldwide on butchery and meat science for venues such as the Stone Barns Center for Agriculture, the James Beard Foundation Chefs Boot Camp, Google, and the National Bison Association. Danforth also consults and provides education to restaurants including Eleven Madison Park, Gramercy Tavern, Bazaar Meat, The Perennial, and Maude. He is the American ambassador for the Butchers Manifesto and a board member of the Chefs Collaborative and the Good Meat Project. Danforth lives in Ashland, Oregon.