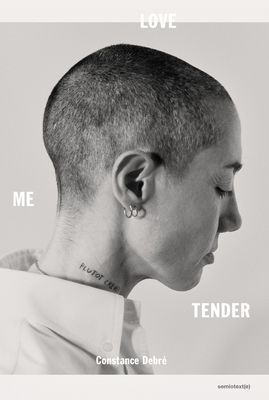 A novel of lesbian identity and motherhood, and the societal pressures that place them in opposition.

The daughter of an illustrious French family whose members include a former Prime Minister, a model, and a journalist, Constance Debré abandoned her marriage and legal career in 2015 to write full-time and begin a relationship with a woman. Her transformation from affluent career woman to broke single lesbian was chronicled in her 2018 novel Play boy, praised by Virginie Despentes for its writing that is at once “flippant and consumed by anxiety.”

In Love Me Tender, Debré goes on to further describe the consequences of that life-changing decision. Her husband, Laurent, seeks to permanently separate her from their eight-year old child. Vilified in divorce court by her ex, she loses custody of her son and is allowed to see him only once every two weeks for a supervised hour. Deprived of her child, Debré gives up her two-bedroom apartment and bounces between borrowed apartments, hotel rooms, and a studio the size of a cell. She involves herself in brief affairs with numerous women who vary in age, body type, language, and lifestyle. But the closer she gets to them, the more distant she feels. Apart from cigarettes and sex, her life is completely ascetic: a regime of intense reading and writing, interrupted only by sleep and athletic swimming. She shuns any place where she might observe children, avoiding playgrounds and parks “as if they were cluster bombs ready to explode, riddling her body with pieces of shrapnel.”

Writing graphically about sex, rupture, longing, and despair in the first person, Debré’s work is often compared with the punk-era writings of Guillaume Dustan and Herve Guibert, whose work she has championed. As she says of Guibert: “I love him because he says I and he’s a pornographer. That seems to be essential when you write. Otherwise you don’t say anything.” But in Love Me Tender, Debré speaks courageously of love in its many forms, reframing what it means to be a mother beyond conventional expectations.

"[Debre]'s new book, Love Me Tender (Semiotext(e), $17.95), admirably translated by Holly James, continues to trace her psychic and sexual evolution, while also describing the agonizing impact of her decisions on her relationship with her son, Paul."
—Claire Messud, Harper's Magazine

"Debré’s guiding principle is the most valuable lesson that she has to share. Radically changing your life is worth nothing if you don’t fully commit to the performance, put everything at stake, and accept that, no matter how hard it gets, you can’t return to the safety of the way things were—not if your sense of self depends on it."
—Alexis Okeowo, The New Yorker

"Debré takes a nasty story about misogyny and child custody and turns it into something more interesting, a story about freedom. [...] Why does a mother cease to be a human being? The author’s honesty is as terrifying as it is deeply exciting."
—Jessica Ferri, Los Angeles Times

"Lingering behind the scrim of Debré’s stripped prose is the destabilizing suggestion that it is nearly impossible to know who we are, primarily because the accretion of symbolic identities and our lust for consumer detritus barricade us from ourselves."
—Alissa Bennett, Artforum

"Beneath Love Me Tender’s wise-cracks—‘You gain ten years when you become gay. Everyone knows that’—there is a serious argument being made: that French society has rendered motherhood and lesbianism incompatible."
—Alice Blackhurst, New Left Review