Fire-Rescue 59: My Mid-Life Crisis as a Volunteer Firefighter-EMT (Paperback) 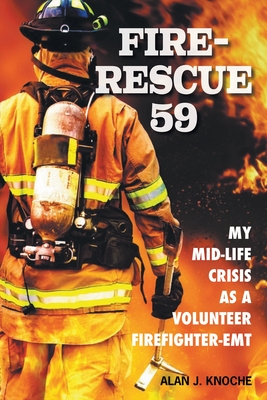 Most firefighters join the fire service when they are young-their teens or early twenties. Alan Knoche was an exception in that he joined when he was in his late thirties. He had a lot of catching up to do, but with life experiences in the Navy, the submarine service, and working at a nuclear power facility behind him, he quickly progressed from rookie to assistant fire chief.

A top responder in a volunteer fire department that answered an average of two emergency calls a day, he fought fires, cut people out of crushed automobiles, and rescued victims from everything from a quarry collapse to a gumball machine. As an EMT, he also responded to thousands of medical and trauma calls and helped people who were experiencing the worst day of their lives.

These stories relate some of the emergencies he faced on his "second job." They are gritty, often challenging, and sometimes sad, but actual life-threatening incidents are seldom pleasant. That's not to say it's all serious. The occasional humorous or comical event is what helps emergency responders cope with the catastrophic and tragic sights they see on a daily basis.

The men and women he served with are some of the most dedicated, talented, resourceful, skilled, and sometimes insane people you could ever hope to show up when you're having your worst day. They made these stories possible.