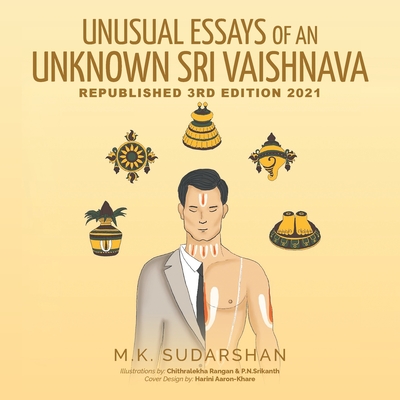 Author M. K. Sudarshan was inspired by the life and works of Sri Ramanujacharya (1017-1137 AD), a great Vedantic philosopher, Sri Vaishnava theologist and social reformer of Tamil Nadu, India and his long successive lineage of followers and gurus from the 12th century A.D. to the present time.

The Upanishads are the ageless spiritual scriptures of India. An ancient Sanskrit adage in them says: "ekam sadh viprah: bahudah vadanti," which roughly means, "The truth is one, but wise ones of the world know it spoken about in many singular ways." The book is the author's attempt to describe precisely such truth in his own way-the way of an ordinary man of his time. . . educated, liberal, wordly and undogmatic.

This book of essays is written with an insider's perspective of Sri Vaishnavism but with a pronounced "outside-looking-in" stance. It attempts to transmute the sense and mood of the hoary Sanskrit/Tamil original texts into readable and intelligible material for today's young global audience craving for an understanding of the interior landscapes of Indian spiritual traditions and schools of thoughts.

For Indian readers, the book imparts a deeper appreciation of the rich wealth of Vedantic literature available in Sri Vaishnavism. For young readers as well as English-speaking foreign readers, it is the author's hope they will be able to discover that Indian philosophy and spiritualism has many variant and beautiful strands of l thought and heart-warming literary traditions in the native vernaculars such as Tamil.

"Homo Sapiens has common spiritual urges, purpose and longing. The ancient Sri Vaishnava system of thought, experience and tradition offers us a unique way of realizing them and seeking the truth through knowing oneself," Sudarshan says.

The book after receiving critical attention and acclaim in India was a catalogued entry in 2017-18 at International Book Fairs held in Frankfurt, London, Beijing, Denver, New Delhi, Sharjah and Singapore. The 3rd Edition of the book now published has been updated and includes 7 new essays as additions and an exciting Prefatory one in which the author presents in one grand, fascinating sweep how History, Geography, Language, Dynasties,

Politics, Customs, Temples, Hermeneutics, Soteriology and Acharyas (lineage of preceptor and gurus) have all shaped and influenced the Sri Vaishnava identity as it evolved over 2 millennnia and become what it is today.