The Next American Economy (Hardcover) 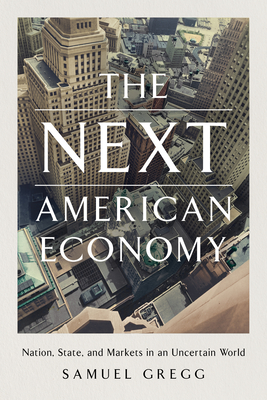 Americans across the political spectrum have turned away from free market capitalism, calling for more government intervention into the economy. This optimistic book explains how a dynamic, Commercial Republic that benefits all Americans is still possible.

"Will someone intent on changing the direction of America's economy seize on this text and send it far and wide?"
--Hugh Hewitt, author, attorney, and national host of The Hugh Hewitt Show


"Markets grounded in a commercial republic are what America needs. Gregg shows why."
--Vernon L. Smith, 2002 Nobel Laureate in Economics, Professor of Business Economics and Law at Chapman University

One of America's greatest success stories is its economy. For over a century, it has been the envy of the world. The opportunity it generates has inspired millions of people to want to become American. Today, however, America's economy is at a crossroads. Many have lost confidence in the country's commitment to economic liberty. Across the political spectrum, many want the government to play an even greater role in the economy via protectionism, industrial policy, stakeholder capitalism, or even quasi-socialist policies. Numerous American political and business leaders are embracing these ideas, and traditional defenders of markets have struggled to respond to these challenges in fresh ways. Then there is a resurgent China bent on eclipsing the United States's place in the world. At stake is not only the future of the world's biggest economy, but the economic liberty that remains central to America's identity as a nation. But managed decline and creeping statism do not have to be America's only choices, let alone its destiny. For this book insists that there is an alternative. And that is a vibrant market economy grounded on entrepreneurship, competition, and trade openness, but embedded in what America's founding generation envisaged as the United States's future: a dynamic Commercial Republic that takes freedom, commerce, and the common good of all Americans seriously, and allows America as a sovereign-nation to pursue and defend its interests in a dangerous world without compromising its belief in the power of economic freedom.