Mordechai Anielewicz: No to Despair (They Said No) (Hardcover) 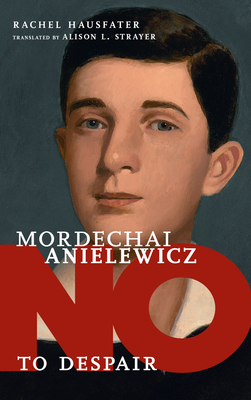 Set before and during the days of the Warsaw ghetto uprising, Say No to Despair, part of the new They Said No series of histories, is a compelling and profound look at the final days of the life of Mordechai Anielewicz, leader of the Jewish Fighting Organization that led the insurrection against Nazi control in Poland during the Holocaust. Tracing the moments before and during the uprising up to Mordechai’s death in 1943, Hausfater delivers an uncompromising story of a revolutionary with a lesson all readers must take with them. Both disturbing and moving, thrilling and devastating, Anielewicz's story elucidates the immense power of resistance and the obligations we have to defend each other from violence and capture—no matter the costs. As Anielewicz himself puts it, “The opposite of despair is not hope, it’s struggle.”

Inquisitive and often on the road and a traveller, Rachel Hausfater lived in Germany, the United States, and Israel plying various trades. Today, in addition to writing, Rachel Hausfater is an English teacher at a school in Bobigny. A translator and author for Thierry Magnier publishing, she wrote a novel in 2009, Un soir j’ai divorcé de mes parents (The Night I Divorced My Parents).
Alison L. Strayer is a Canadian writer and translator. She won the Warwick Prize for Women in Translation, and her work has been shortlisted for the Governor General's Award for Literature and for Translation, the Grand Prix du livre de Montreal, the Prix littéraire France-Québec, and the Man Booker International Prize. She lives in Paris.

"A thrilling biography with the immediacy and emotional impact of a novel. . . . 'The opposite of despair is not hope,' Anielewicz famously said. 'It’s struggle.' That’s an apt description of the They Said No series, whose stated mission is to demonstrate 'the importance of standing up for what you know is right.' Perhaps, if these books rally enough young activists to say no to fear and despair, future Politkovskayas and Anielewiczes will be able to lead long and happy lives."
--Alan Gratz, New York Times Book Review