Men in My Situation: A Novel (Hardcover) 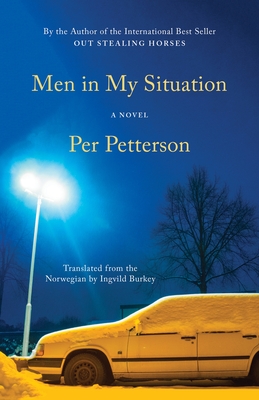 A tender, merciless portrait of a life going to pieces by the internationally acclaimed author of Out Stealing Horses.

Men in My Situation, Per Petterson’s evocative and moving new novel, finds Arvid Jansen in a tailspin, unable to process the grief of losing his parents and brothers in a tragic ferry accident. In the aftermath, Arvid’s wife, Turid, divorced him and took their three daughters with her. One year later, Arvid still hasn’t recovered. He spends his time drinking, falling into fleeting relationships with women, and driving around in his Mazda. When Turid unexpectedly calls for a ride home from the train station, he has to face the life they’ve made without him.

Critics have already hailed Men in My Situation as the equal of Petterson’s international bestseller Out Stealing Horses, in part for his unflinching portrayal of Arvid’s dark night of the soul. In this moment of faltering hope and despair, Arvid’s daughter Vigdis—who he’s always felt understood him best—has a crisis of her own and reaches out. Now he must find a way to respond to someone who, after everything, still needs him. Reaching the heights of Petterson’s best work, Men in My Situation is a heartrending, indelible story from a celebrated author.

Per Petterson is the author of books including In the Wake, To Siberia, and I Curse the River of Time. Out Stealing Horses has won the IMPAC Dublin Literary Award, the Independent Foreign Fiction Prize and the Norwegian Booksellers' Prize. The New York Times Book Review named it one of the 10 best books of the year. A former bookseller, Petterson lives in Oslo, Norway.

“Per Petterson [is] a master at capturing internal tumult, family relationships and the vicissitudes of grief. . . . ‘Men in My Situation’ is possessed of an austerity and bleakness that is satisfyingly unforgiving.”—Nina Renata Aron, Los Angeles Times

“With ‘Men in My Situation,’ Petterson deepens his examination of grief by animating how a parent's loss, depression and trauma can be passed from one generation to the next. . . . . Ultimately, Petterson provides an honest portrait of how one family unravels — and hopefully is put back together again, albeit in a different configuration.” —S. Kirk Walsh, Star Tribune (Minneapolis)

“Men in My Situation [is] the best book I’ve read this summer. . . . Petterson’s writing (brilliantly rendered by translator Ingvild Burkey) slips away from you, and you watch in quiet amazement as it rises into a beyond that’s lying right there, before you, on the page.”—Cory Stockwell, The Common