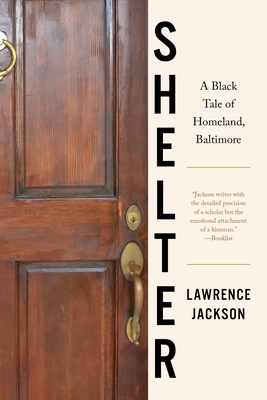 A stirring consideration of homeownership, fatherhood, race, faith, and the history of an American city.

In 2016, Lawrence Jackson accepted a new job in Baltimore, searched for schools for his sons, and bought a house. It would all be unremarkable but for the fact that he had grown up in West Baltimore and now found himself teaching at Johns Hopkins, whose vexed relationship to its neighborhood, to the city and its history, provides fodder for this captivating memoir in essays.

With sardonic wit, Jackson describes his struggle to make a home in the city that had just been convulsed by the uprising that followed the murder of Freddie Gray. His new neighborhood, Homeland—largely White, built on racial covenants—is not where he is “supposed” to live. But his purchase, and his desire to pass some inheritance on to his children, provides a foundation for him to explore his personal and spiritual history, as well as Baltimore’s untold stories. Each chapter is a new exploration: a trip to the Maryland shore is an occasion to dilate on Frederick Douglass’s complicated legacy; an encounter at a Hopkins shuttle-bus stop becomes a meditation on public transportation and policing; and Jackson’s beleaguered commitment to his church opens a pathway to reimagine an urban community through jazz.

Shelter is an extraordinary biography of a city and a celebration of our capacity for domestic thriving. Jackson’s story leans on the essay to contain the raging absurdity of Black American life, establishing him as a maverick, essential writer.

“[Shelter] is told in wide-ranging essays that touch on subjects including the joys and challenges of Black fatherhood, the overlooked history of [Jackson's] new, mostly White neighborhood of Homeland, his connection to his childhood church, the perils of Black upward mobility, the pain of divorce, and the everyday challenges of homeownership. The book is by turns searing, informative and funny, as Jackson explores both serious issues and absurdities of his life and his city.”—Michael A. Fletcher, The Washington Post

“[A] bittersweet meditation on race and belonging. . . . In resonant prose, Jackson ably conveys the feuding aspirations and unease of the Black middle class. . . . The result is a stirring reflection on the meaning of home.”—Publishers Weekly

An extraordinary dual portrait of the author and his hometown—angry, tender, incisive, and bracingly eloquent.”—Kirkus Reviews, starred review

“There are an endless number of wonderful things to say about Lawrence Jackson’s Shelter—from luminous to breathtaking to just being outright admirable. Jackson essentially gifts his reader with two stories that are skillfully and beautifully intertwined: the work to create a great home for himself and his two sons, and a history of Baltimore, the hometown that helped create him. Along the way we are treated to so much that helps those stories come to life—from Jackson’s history with cars to the ingredients of 19th century cornbread to Johns Hopkins University’s treatment of Black people. It is all a lovely mix. Jackson has the mind of a historian, but he is also something of a poet—just note these words: ‘a person whose strength is more meringue than muscle.’ Shelter is a singular achievement.”—Edward P. Jones

“Shelter is an intriguing meditation on past and present Baltimore, as reflected through the eyes of a black native son. Lawrence Jackson, deeply ambivalent about returning after years away from his once-slaveholding hometown, is a keen observer of the complex interplay between race, time, and place. Surprisingly funny and often unsettling, Shelter is a fascinating read.”—Nathan McCall, author of Makes Me Wanna Holler: A Young Black Man in America

"Shelter is written in sharply beautiful, descriptive prose. Jackson’s love of language is woven into each sentence, alongside his understanding of the current moment as informed by the depth of all that came before."—Kristi King, Christian Century