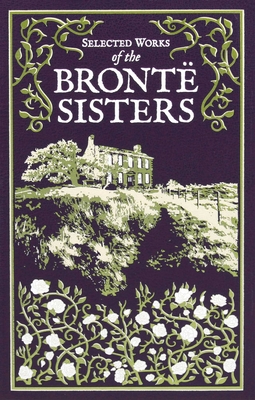 The literary masterpieces of the three Brontë sisters in one volume: Jane Eyre, Wuthering Heights, and The Tenant of Wildfell Hall.

This handsome leather-bound edition includes the most acclaimed novels of each of the Brontë sisters: Charlotte’s Jane Eyre, Emily’s Wuthering Heights, and Anne’s The Tenant of Wildfell Hall. Originally published under male pseudonyms in the 1840s, these three novels later helped give rise to the feminist literary movement of the late nineteenth century, in which women’s perspectives became more accepted by the mainstream reading public. A scholarly introduction provides an overview of the sisters’ childhood in northern England, their literary influences, and their enduring legacy.

Charlotte Brontë was born in 1816 in Yorkshire and died in 1855. She was the third of six children and the oldest of the three well-known novelist and poet Brontë sisters. Brontë published several novels; however Jane Eyre remains her most famous literary work.

Emily Brontë was born in Thornton, Yorkshire, England, on July 30, 1818. The daughter of a clergyman, she lived a solitary life in Haworth, Yorkshire, with her father; brother, Branwell; and surviving sisters, Charlotte and Anne, until her death on December 19, 1848. Published in 1847 under the pseudonym “Ellis Bell,” Wuthering Heights—her only novel—is now considered one of the masterpieces of English literature.


Anne Brontë (1820–1849) was an English novelist and poet, best known for her novels Agnes Grey and The Tenant of Wildfell Hall.

Ken Mondschein is a college professor, scholar, fencing master, jouster, and author with expertise in subjects ranging from medieval history to contemporary politics. He was a Fulbright scholar to France, received his PhD in history from Fordham University and is certified as a master of historical fencing by the US Fencing Coaches' Association. His work includes history, fencing, introductions to works of classic literature, and other projects.