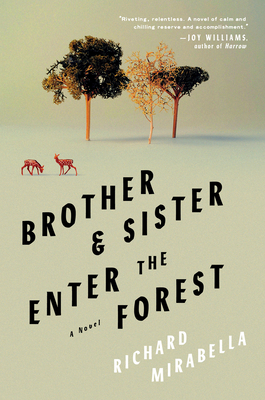 Opening like a fairy tale and ending like a nightmare, this cannonball of a queer coming-of-age novel follows a young man's relationship with a violent older boyfriend—and how he and his sister survive a terrible crime

After years of severed communication, Justin appears on his sister’s doorstep needing a place to stay. The home he's made for himself has collapsed, as has everything else in his life. When they were children, Willa played the role of her brother’s protector, but now, afraid of the chaos he might bring, she’s reluctant to let him in.

Willa lives a carefully ordered life working as a nurse and making ornate dioramas in her spare time. As Justin tries to connect with the people she’s closest to—her landlord, her boyfriend, their mother—she begins to feel exposed. Willa and Justin’s relationship has always been strained yet loving, frustrating and close. But it hits a new breaking point when Justin spirals out of control, unable to manage his sobriety and the sustained effects of a brain injury.

Years earlier, in high school, desperate to escape his home life and his disapproving, troubled mother, Justin falls into the hands of his first lover, a slightly older boy living on his own who offers Justin some semblance of intimacy and refuge. When Justin’s boyfriend commits a terrifying act of violence, the two flee on a doomed road trip, a journey that will damage Justin and change his and his family’s lives forever.

Weaving together these two timelines, Brother & Sister Enter the Forest unravels the thread of a young man’s trauma and the love waiting for him on the other side.

Named a Most Anticipated Book of the Year by Salon, Vulture, Chicago Review of Books, and LGBTQReads

Goodreads, A Buzziest Debut Novel of the Year

"Mirabella writes about the strange land between fable and reality, and this novel deftly explores the surreal undertones of familiar themes like love and loyalty. Part fantastical horror, part road trip narrative, Brother & Sister Enter the Forest is an uncanny portrait of the lengths we go to protect the people we love." —Isle McEroy, Vulture, A Most Anticipated Book of the Year

“Told with an incredibly steady hand, this novel dissects a tense sibling relationship. Carefully detangling life-shattering events from the pair’s past, the book manages to look straight at its characters and show the shadows behind them. Like the careful dioramas that the sister makes in her spare time, this book is an exquisite creation, made carefully and precisely.” —Bustle, A Most Anticipated Book of the Year

"This debut novel hits all the right themes: marriage, motherhood, ecological collapse, and the insidious ramifications of capitalism." —Julia Hass, Literary Hub, A Most Anticipated Book of the Year

"Mirabella’s debut novel—about a pair of once-close siblings and how the bruises of their youth swell into adulthood—is both bracing and a balm, his softly disarming sentences like cotton puffs that absorb the pain of deep cuts." —Michelle Hart, Electric Literature

"[B]y turns contentious and tender . . . A gripping [...] meditation on the difficulties of youth and the salvation that can be found in family." —Publishers Weekly

"There are so many things to love about Richard Mirabella’s outstanding Brother & Sister Enter the Forest but what I love best is its meticulous attention to atmosphere, by which I mean the music of the book, the soul of it, expressed in its incisive descriptions, its cadence, its dark and tender heart. It’s what revives me every time I pick it up, and it will keep me coming back again and again.” —Paul Lisicky, author of Later: My Life at the Edge of the World

"This is a gorgeous novel—full of mystery, dread and a deep, melancholy understanding of what it means to love someone who is mentally ill. I was completely captivated." —Dan Chaon, author of Sleepwalk

"Richard Mirabella's debut novel Brother & Sister Enter the Forest doesn't so much seek understanding as it does carve indelible and brave circles into the depths of desire, violence, loss, and belonging that keep us alive, connected, heartbroken and in love, despite logic or consequence. This novel makes the world bigger." —Madeline Ffitch, author of Stay and Fight

"Riveting, relentless, a novel of calm and chilling reserve and accomplishment." —Joy Williams, author of Harrow

“A unique, evocative novel that doesn't shy away from awkwardness and pain. Mirabella's debut delves into the stubborn, haunted connections between his characters and those they've known and loved. A wry, original, new voice in fiction!” —Rachel B. Glaser, author of Paulina & Fran

“Befitting its fairy-tale title, Brother & Sister Enter the Forest sits in a mist of unease, haunted by the restless ghosts of childhood violence and abuse. But what lingers most in Richard Mirabella’s masterful novel are the brilliant moments of tenderness between siblings, between lovers, between friends, between parents and children—all of them grasping for one another’s hands in the face of so much pain, all of them fighting to meet life’s messiness with compassion and love. This is brave, beautiful storytelling.” —Zak Salih, author of Let's Get Back to the Party