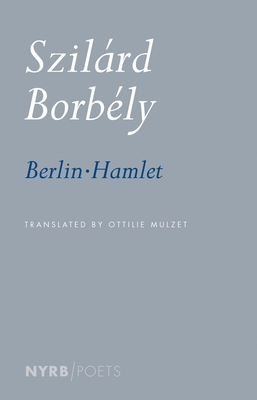 By Szilárd Borbély, Ottilie Mulzet (Translated by)
$14.00
It's Complicated--Contact Us for More Information

Before his tragic death, Szilárd Borbély had gained a name as one of Europe's most searching new poets. Berlin-Hamlet—one of his major works—evokes a stroll through the phantasmagoric shopping arcades described in Walter Benjamin’s Arcades Project, but instead of the delirious image fragments of nineteenth-century European culture, we pass by disembodied scraps of written text, remnants as ghostly as their authors: primarily Franz Kafka but also Benjamin himself or the Hungarian poets Attila József or Erno Szép. Paraphrases and reworked quotations, drawing upon the vanished prewar legacy, particularly its German Jewish aspects, appear in sharp juxtaposition with images of post-1989 Berlin frantically rebuilding itself in the wake of German reunification.

Szilárd Borbély (1963–2014) was born in Fehérgyarmat in eastern Hungary and studied Hungarian philology and literature at the University of Debrecen, where he later taught. An authority on Hungarian literature of the late-Baroque period as well as a writer, Borbély was awarded several literary prizes, including the prestigious Palladium Prize in 2005. His first major critical success was his third book, Hosszú nap el (Long Day Away, 1993), praised by such writers as Péter Esterházy and Péter Nádas. His verse collections Halotti pompa: Szekvenciák (Final Matters: Sequences, 2004) and his novel, Nincstelenek (The Dispossessed, 2013), are considered among the most important Hungarian works of literature of the early millennium. His poems have appeared in English in The American Reader, Asymptote, and Poetry. Berlin-Hamlet is his first full collection to be published in English.

Ottilie Mulzet received the Best Translated Book Award in 2014 for her translation of László Krasznahorkai’s Seiobo There Below. Other translations include Borbély’s The Dispossessed and Gábor Schein’s Lazarus.

“Berlin-Hamlet is a rich tapestry of ‘subjective’, ‘pseudo-subjective’ and ‘meditative’ texts, all related to present-day Berlin, though tinged with memories of more sinister places like Wannsee, where the decision about the systematic extermination of European Jews was taken by Nazi bureaucrats in 1942.” —World Literature Today

“[Borbély] is considered one of the most important figures in contemporary Hungarian literature, having had an immense impact on the transformation of Hungarian poetry in the last decade, strongly influencing the conceptualization of poetry’s social role and linguistic-thematic possibilities...Borbély’s poetry, prose, and essays try to bring the readers closer to the lives of those who cannot speak of their trauma or suffering. They can be uneducated and poor villagers, survivors of the Holocaust, women grieving after a miscarriage, or victims of terrible aggression. Through Borbély’s texts we readers become increasingly less cruel-hearted.” —László Bedecs, Asymptote