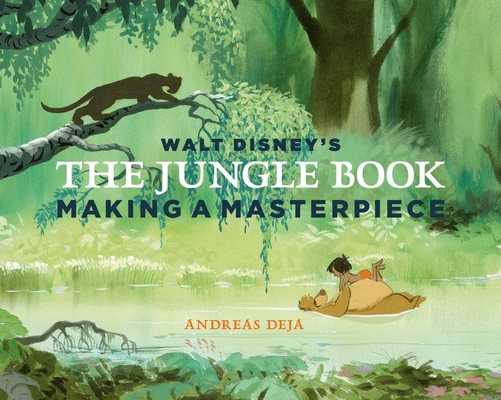 The ultimate collection of artworks, history, memorabilia, and behind-the-scenes anecdotes every fan of The Jungle Book, one of the Disney Studios’ most popular movies, will cherish.

Written by Disney Legend Andreas Deja and lavishly illustrated, Walt Disney’s The Jungle Book gathers original animation celluloids, animation drawings, and concept art—many of which have never been shown to the public—from the popular exhibition at The Walt Disney Family Museum in San Francisco.

Considered one of the finest and most influential Disney movie, The Jungle Book (1967) is the last animated film that Walt Disney personally produced with his signature vision and footprint. This curated collection explores the nuanced complexities and challenges that were overcome throughout the film’s development and production, such as the unique characters and their voice-actor counterparts, the application of cutting-edge animation techniques of the time, and the timeless, original songs by the Sherman Brothers and Terry Gilkyson. Dive into the impact of Walt’s passing on the Disney Studios and the everlasting legacy of the film throughout the world.

NEVER-BEFORE-SEEN ANIMATION: Includes original animation celluloids, animation drawings, and concept art from lead animators, most of which have never been seen by the public

EXPLORE THE HISTORY OF A BELOVED CLASSIC: Walt Disney’s The Jungle Book narrates the complexities faced during the film’s development and production as well as the use of new animation techniques at the time

WRITTEN BY A DISNEY LEGEND: Andreas Deja, named a Disney Legend in 2015, has designed and overseen the animation of countless animated Disney films including The Little Mermaid, Aladdin, Beauty and the Beast, Hercules, and Lilo and Stitch

PERFECT GIFT: Walt Disney’s The Jungle Book is a must-have collectible gift for every Disney enthusiast and film historian in your life

Disney Legend Andreas Deja, who was greatly influenced by The Jungle Book as a child, designed characters, costumes, and animation for The Black Cauldron (1985), The Great Mouse Detective (1986), Oliver & Company (1988), and Who Framed Roger Rabbit (1988). Deja also oversaw the animation of King Triton in The Little Mermaid (1989), served as a supervising animator for Gaston in Beauty and the Beast (1991), designed and animated Jafar in Aladdin (1992) and Scar in The Lion King (1994), served as the animator of Hercules (1997) and designed and supervised the animation for Lilo in Lilo and Stitch (2002).

The Walt Disney Family Museum was co-founded by Walt’s daughter, Diane Disney Miller, and grandson, Walter Miller. Located in San Francisco, the museum is dedicated to sharing and celebrating the life, work, and legacy of Walt Disney through innovative exhibits and programs.