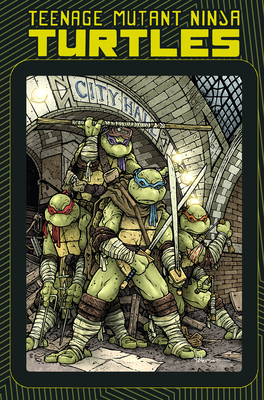 TMNT returns to its roots in these stories spotlighting each of the individual Turtles. All of the brothers will face long-lasting repercussions in the aftermath.

First, Donatello understands that more is at stake than his brothers realize. In order to prepare for the coming conflict, Don will aim to repair his relationship with his mentor, Harold... and his malicious robotic counterpart, Metalhead! Then, Michelangelo's deteriorating relationship with his father, Splinter, reaches a point of no return! Will Mikey fight those he loves to save those who need him the most? Next, Leonardo seeks refuge in Northampton, but danger follows--in the form of Koya and Karai! An epic throwdown will result in Leo making a drastic decision that will quickly alter the course of TMNT history! And finally, Raphael is pushed to his breaking point as he is separated from his brothers and forced to endure an onslaught from the nefarious Bishop unlike anything he has experienced in the past!

Kevin Eastman was born in 1962 in Portland, Maine, and began drawing as soon as he was able to hold a crayon. His discovery of comic books gave meaning to his crazed doodling. After discovering the work of Jack Kirby, Russ Heath, Richard Corben, Vaughn Bode and John Severin, he began to hone his craft. His first published work appeared in 1980, a year or so before he met Peter Laird. In May 1984, he and Laird published Teenage Mutant Ninja Turtles #1, creating the hit heroes in a half-shell. Eastman co-writes Teenage Mutant Ninja Turtles for IDW.

Paul Allor is a comic book writer, letterer, and editor based in North-Central Indiana. He has worked on properties ranging from Teenage Mutant Ninja Turtles to Guardians of the Galaxy to Bravest Warriors, as well as critically-acclaimed creator-owned books such as Tet, Past the Last Mountain, and Strange Nation.